I will be back soon. I promise. 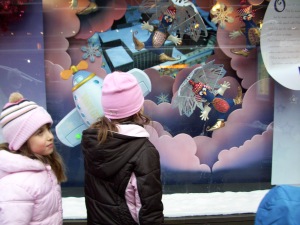 HAVE A GREAT CHRISTMAS!!!!

Being that it’s Christmas week, I thought I’d share some of the memorable Christmases we’ve had as the pastor’s family.

We had this dog.

Her name was Pepper and she was a schnauzer.  (Don’t let the cuteness of this picture deceive you.)

My family consistently told Ken and me what a cute, friendly, smart little dog she was.  She did smart things like bark at trees if you told her “Get the squirrel, Pepper!”  She didn’t care whether or not a squirrel was actually in the tree.

At the time of the dog, my dad was doing Family Living Seminars and one of his points was that the entire family should greet Dad (or Mom) when he came home from work.  In other words, homes whould be places of welcome.  So my parents taught Pepper to jump up and down and bark with enthusiasm and excitement if you said, “Daddy’s home.” It didn’t matter that it was my father saying it to her, she would still do it.

OK.  Maybe when this dog was young, she was cute, friendly and smart.  Back when she was my brother’s dog.  But then he went to college and she became my parents’ dog.  Then they started doing Family Living Seminars, so at the point in this dog’s life (I think she was about 213) when she was no longer exactly cute, she was ceremoniously brought to our house in Michigan.

1. She scratched incessantly.  Bang, bang, bang, bang, her doggie kneecap hit the floor.  No, she didn’t have fleas, she just liked to scratch.  Maybe if we could’ve afforded to send to some doggie spa for a moisterizer treatment, we could’ve stopped it, but alas, we didn’t even have money to send ourselves anywhere, much less the dog. The scratching drove all of us crazy – and the bald spots on her fur looked less than beautiful, too.

2. She ate everything and anything she could get her doggie mouth on.  Truly, you had to dispose of the garbage and empty every wastebasket before you left the house even for a moment.  And, because she was a schnauzer and not a BIG dog, any people food was cause for major throw up and I mean MAJOR.  Now, I’ve been around dogs all my life and I know dogs throw up – but because a schnauzer’s stomach is delicate well … enough said.

One time, we had some out-of-town company so before we left for church, I warned them to lock up anything edible.  They had some candy bars, so they hid them away in their suitcases.  However, they forgot to lock up their toothpaste.  No joke.  What a mess!  At least she had good breath that day!

Anyhow, remember those Christmas candy boxes churches used to give out at Christmas programs?  They were about 5 x 2 x 3 in size and brightly colored.  You ordered them for a Christmas-program-candy-specialty place and they were filled with hard candy and chocolate-covered creams that tasted like melted plastic.

So, this one day we were over at church rehearsing for the Christmas program.  Afterwards, we cheerfully went home and discovered a dog with chocolate all over her face.  She had literally opened the sealed cardboard packing box and eaten about 25 boxes of the  Christmas candy.  Unbelievable.

Ken just sighed.  He knew we would have one sick dog.

Meanwhile, we erased the checkmark on our “todo” list in front of Christmas Program Candy and headed back to the store …

And she gave birth to her firstborn, a Son. She wrapped Him in cloths and placed Him in a manger, because there was no room for them in the inn.

I spent a lot of time with three of the munchkins today and I spent some of that time talking with them about Luke 2.  Then we decided to put together a small program for when Dad and Mom came back. Everything went well, except the 4yo kept saying “King Heron.”

“No, it’s King Herod,” I explained several times.  And he got it.

You know, sometimes we hear the events of that long ago night so often, we can tell it in our sleep and so can our kids.  I wasn’t telling the munchkins anything they didn’t know. In fact, I knew at times they answered my questions with the exact wording they had heard from their parents or teachers at church.

But to some kids (and adults), the real events of Bethlehem are as unfamiliar as … well, as something they’ve never heard of before, because in actuality, they never HAVE heard the facts.

In the ministry, we have the opportunity of watching kids (and adults) learn about the Bible for the very first time, we have the privilege of seeing God’s Word click in their minds, we have the joy of seeing someone recognizing the importance of God sending His Son to earth.

And as we experience the opportunity, the privilege and the joy, we must never, ever lose the awe of that moment.

Allison, a pastor’s wife from Wisconsin, shared pictures from the annual Christmas open house she and her husband do for the church.

First of all, notice the wall decoration – Allison wrapped the pictures on her wall. What a great and easy idea for an instant and inexpensive decoration! She found the candle tree at Crate and Barrel at last year’s after Christmas sale for $12.00.

Here are some of the great things that she served! 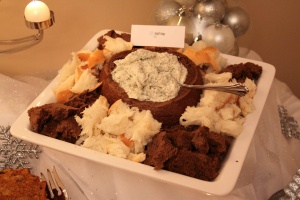 And I loved the picture of the shoes! 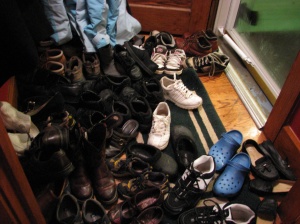 Question: What do you do when someone gives you a Christmas gift (usually monetary) that you know they can’t afford?

Answer: Being a pastor/pastor’s wife can be hard at times for different reasons. One of the things most of us will experience in our ministry are people who give us gifts that they can’t afford to give. This is usually an older person on a fixed income whom you know struggles to meet monthly expenses. Yet, every Christmas you receive a card and a $25.00 check.

The most important thing you can do is be gracious. Do something specific and meaningful with the money. We usually used such gifts for something having to do with the ministry (a book for Ken, gas to go to a conference, etc.) or on time spent together with the family (our family was able to go out to dinner, visit the park, gas money to visit the grandparents), etc.  We would not use the gifts on a new computer game or flat-screen TV or a swimming pool. (Actually, now that I think about it, we didn’t use ANY money for those things.)And I would always mention what we did specifically. In our minds, using the gift for something meaningful and specific helped the person know how much we appreciated their sacrifice.

Still, there are times when we felt truly bad using the gift, knowing that we had more money than the person giving it to us.

Kristy added a comment that they put a box in their church lobby for church people to put cards for each other. The box has slots for every letter of the alphabet so people can send cards to each other without having to worry about postage expense.

Another idea is for people to send one card to everyone in church. Those cards can be hung on a tree or hung somewhere in the lobby.  This also allows everyone to read cards from missionaries and far away church members – who send cards to the church. Sometimes not everyone gets to see these cards and read them. This allows everyone opportunity to see what’s happening in those people’s lives. 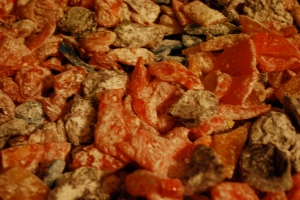 QUESTION: We get Christmas cards from a lot of people at church. What do we do in return?

ANSWER: Last week I  mentioned that the last few years, I made little bags of candy for everyone at church. Usually we attached a small card with a verse or thought on it. I stood in the church lobby after church and handed them out.

On years when we didn’t do the candy, we wrote a letter to the people and then sent it out to everyone on the church mailing list. This wasn’t the newsy-type letter with statistics about our kids’ music lessons and sports activities, but rather a devotional thought about something that had happened during the year. And we all signed it – even the kids.  We addressed them and sent them from our home, rather than have them done in the church office – because this letter was from our family to the congregation. We also paid for postage – even though it was official, church-mailing list letter. 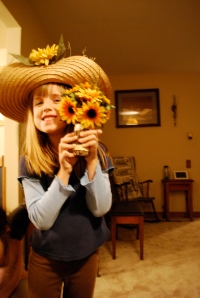 This has been a crazy week.  Deadlines to meet by Christmas, department parties, Bible study teas, Christmas shopping – and finishing painting my bathroom.

But – being the multi-tasker I am, I was feeling I could do it all.

Which lasted until I was hanging a mirror and baking a cake at the same time – something had to give, so I rushed the cake-baking process and no longer had the beautiful this-always-turns-out-perfectly result.

At which point, I came up with a Linda Law “Multi-tasking can result in multi-messes.”

And I started thinking about life and how busy we are, running around, doing everything possible and multi-tasking our way to catastrophe. Instead of diligently doing the thing we’re focusing on, our brain is scattered all over the place.

No, multi-tasking is not wrong and I’m sure I’ll continue to do it for a long time – but when I multi-task to the point that what I’m doing doesn’t work, then it’s no longer worthwhile. Sometimes the most important thing is to diligently complete the task that I’m doing and complete it well.

The Lord says, The plans of the diligent lead to profit as surely as haste leads to poverty.

No, I’m not in poverty because of one ruined cake – but I actually am a little broker – since I had to stop at the grocery store on the way to work and buy one.

So, this week as you tie up all the Christmas tasks – remember to do what you do well.

Because multi-tasking can lead to multi-messes.

She and her husband have begun a monthly “Hang out with us” night. They invite four people (adults only) to their house for a night of game playing – with the purpose of just becoming better acquainted. Carol says she only serves drinks and popcorn, so there’s no preparation except to clean the house. (This is also an inexpensive way to entertain.)

Carol says, “People are so busy that they don’t work at getting together with anyone much of the time. I am praying that this will help all of us bond with each other.”