One of my “friends” had this on his FaceBook status this morning:

A bumper sticker I saw driving to work today – Honk if you love Jesus. Text while driving if you want to meet Him

Ok, yeah, there’s a reason I haven’t done a real good job on the keeping-up-with-the-blog thing.

So, anyhow, I won’t go into all that.

It actually comes down to this. They moved my corporate parent blog so it has more exposure and so I feel like I should actually post on it more than once a month now that people can actually get to it.  But because we’re in deadline chaos at work – I do my blog at night and after I get done doing that blog, I don’t have a lot of energy for this one.

Oh, I just remembered something funny that happened at work today. We’re in those no-privacy cubicles where you can hear everything that’s going on in the lives of everyone around you. So, a lot of time we all work with iPods going so we block everything out. Then when people are on the phone you either don’t hear or pretend you don’t hear.

Well, today, the lady next to me called someone (I’m guessing her husband) and said, “Did I leave my lunch on the counter?”  I guess whoever she was talking to said “yes,” because then she said, “Oh, I have another meeting and I’m absolutely starving and I won’t be able to get anything to eat for another couple hours.”  She then hung up and I heard her gathering her things together for the meeting.

And I’m thinking “Hmmm … I have a box of granola bars here – should I admit I was listening and offer her a granola bar or should I pretend I didn’t hear her and ignore it.

My eavesdropping won out and I grapped the granola bars and headed to her office – just as the man whose office is on her other side came over from his side in perfect synchronization and also handed her a granola bar.  You had to have been there – but it was funny.

So, this morning on the way to work the weather was all foggy and sunny and and I had my little camera so I stopped … 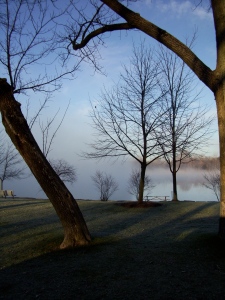 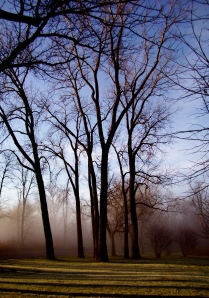 Here’s what I saw when I walked out to the parking lot after work tonight.

Another thing the munchkins and I did the weekend their parents were in places north exploring the leaves and the lake- was go to the building dedication at the church where I grew up.

The last time they h

ad had a building dedication was in the 70s, in fact here is my adorable daughter feeling very grown up (she liked that purse) shortly after said dedication. At this time in her life, she was the daughter of the associate pastor and granddaughter of the pastor.

Anyhow, this dedication just happened to be on the Sunday that the kids were with me, so we got up bright and early and headed for my mom’s and then headed even further east to Des Plaines.

A lot of people who used to attend Des Plaines (the attendance has dropped about 1500-1600 over the years) still live in the area and came back for the dedication. So, being the camera person that I am – I actually HAD my camera, but never took it out of my purse. I was too busy saying “Hi” to everyone.

So, I’ll admit I “borrowed” the pictures from Pastor Scott’s Facebook page (well, not Kelli’s picture), but the others. I don’t think he’d mind.

Pastor Scott said that if there were 600 there for the dedication, he’d wear a Bears Jersey since he is a Packers fan.  Actually, 603 showed up, so if WE hadn’t been there, he wouldn’t have had to do that.  (Even the mayor was there.)

All very interesting (Scott’s been pastor about a year or so).

But I think the most poignant moment came when he announced that there had been a time capsule placed in the building at the last dedication.  I whispered to my mom, “Did you know that?”  She hadn’t.

First they showed us a DVD of the men getting the time capsule out of the wall. This was an unexpected surprise – because anyone that knew my dad, knew he liked to write letters.  I knew that time capsule would contain my dad’s “voice” through his writing.

But then Scott showed us that moisture had gotten into the capsule and yes, there were my dad’s papers in there – but they weren’t able to read them because of the moisture.  An audible “ahhhh” filled the auditorium because a lot of the people had attended Des Plaines when dad was there.  Scott said he felt like Geraldo.

(He explained that back in the 70s, people were told to put time capsules in copper – but that was actually not right.  The best thing is Tupperware.  So that’s what they did for this dedication.

Anyhow – here are the pictures I stole … I mean borrowed.

Actually what I’m doing is being perplexed.

They have moved my corporate parenting blog to wordpress and I was so exctied that I could do pictures on it again.

Why?  I need some expert help.  I don’t understand why it’s a problem since it is now the same server as this one and this one allows me to use the good camera pictures.