One of the magazines that makes the rounds at work is Biblical Archaeology Review – sometimes shortened to BAR.

The current issue … (Oops, I take that back, it’s from last fall – but sometimes that’s the way the magazine inter-departmental routing system goes.) Anyhow, the issue that has just this week reached my desk is a special anniversary issue – 200th issue of the magazine.

One of the features of the issue is a listing of the ten most important archaeological discoveries and one of those discoveries is in the ancient city of wealth  –  Sepphoris or Zippori. Sepphoris was destroyed by an earthquake in 363 A.D. (Remember it was destroyed in 363 A.D., not built. In fact, for a time, it was the seat of Roman government – hence the lavishness of the homes.)

Sixteen centuries later (hard to imagine, isn’t it?) archeologists discovered an unbelievable mosaic in the triclinium (dining room) in what they believe to be a Roman governor’s house in Sepphoris. The mosaic is a twenty-foot square and includes what is now known as the Mona Lisa of the Galilee. The year of discovery was 1987.  The mosaics used to make the woman were just less than .2 inch squares and more than a million tiles were used.  Not only do you see her slight smile, but her blushing cheeks and the pupils of her eyes. An amazing piece of artwork. (Interestingly, Sepphoris is only four miles from Nazareth.)

But besides the beauty of the Mona Lisa of the Galilee, I was interested because I’ve been there and I’ve seen it.

This picture is not from the magazine, but one we got when we were in Zippori National Park. (I’m guessing we couldn’t take pictures inside the house, because this was a postcard.) 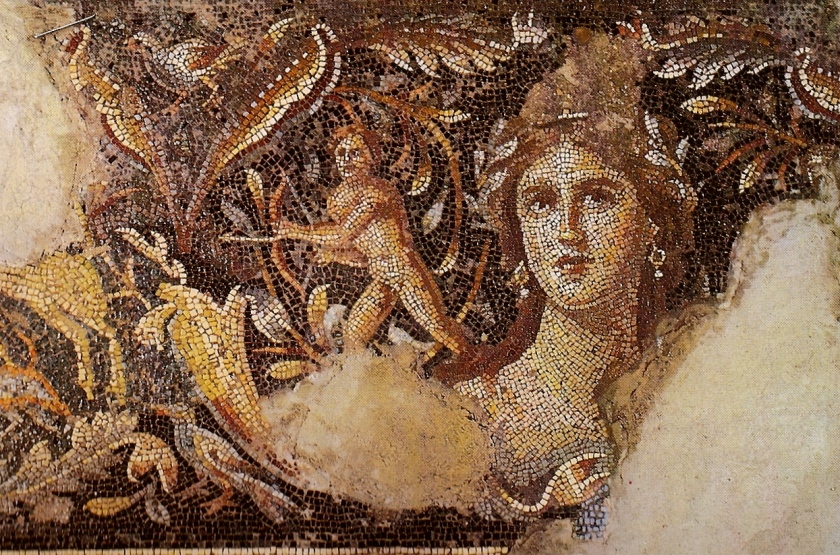 The city had many wealthy residents and a DVD we saw showed how they lived richly, lounging in chairs, munching on grapes and whatever else they did back in the earliest centuries. The house with the mosaics was actually a two-story structure.

And it had a toilet.  Yes, a toilet that actually drained down into an underground system.

On the floor by the toilet was yet another find – the words “to your health.”