So the 6yo had a birthday a few weeks ago and instead of giving him a tangible gift, I promised him a “date” to a surprise special place.

As we drove, the 6yo talked about everything from our destination to liking summer better than winter. (That conversation had something to do with the falling snow).  And then somehow the summer/winter conversation meandered over into theological issues like “Where was God when Jesus was on the cross?” or “What came first the nails or the crown of thorns?”  He deci 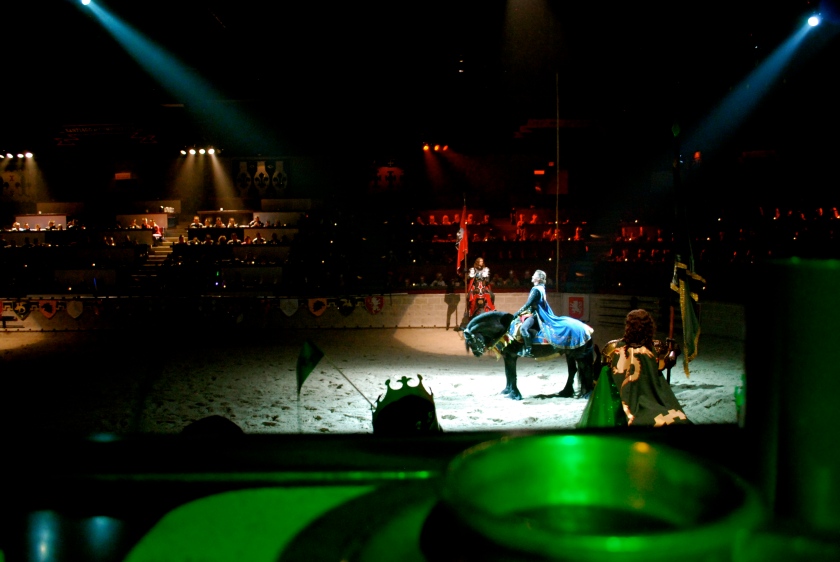 ded the crown of thorns was the very painful (his word) part.

Still talking theology, we pulled into the parking lot of Medieval Times.  You are supposed to get there an hour early in order to mill around a

gift-shopped enveloped lobby and ward off offers to upgrade your ticket by $20.00. We resisted, but I did buy him a $12.00, light-up sword which he wielded handily among the crowd of people wandering around (including

many other sword-carrying kids). Meanwhile, trumpeters would herald the arrival of the king who every ten minutes would knight kids who were having birthdays or older guys who had finished boot camp or people who just wanted to be 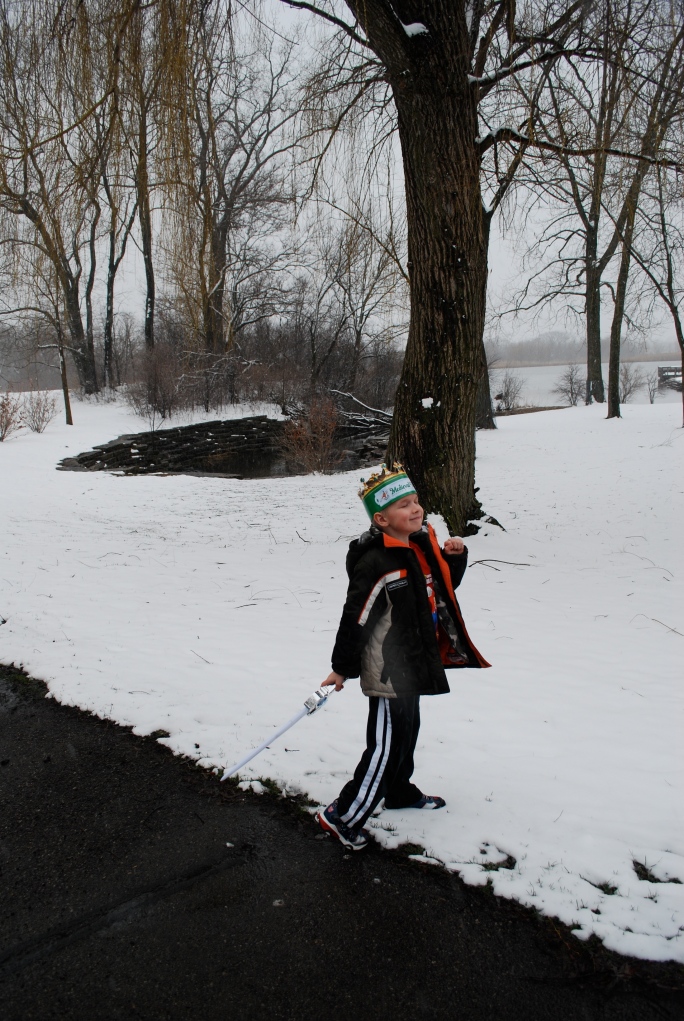 knighted for fun. (I’m guessing another $20.00.) We also had our picture taken with the queen when we walked in – that would’ve been another $20.00 (they take your picture at the table for $10.00). The picture with the queen turned out well – but I resisted. By the way, I did have a buy one ticket, get one free deal for the overall price.

Finally we were ushered into the banqueting hall – we were on the green team. The food included tomato-bisque soup (fairly good), a half chicken (fairly good), garlic bread (good), a half baked potato (good), a spare rib (fairly good) and a delectable apple turnover which was light, flaky and warm. (I don’t remember the food being very good or that MUCH food the last time I was there several years ago for my niece’s birthday.) Oh, and you don’t get silverware – you eat with your fingers.

And then the games began – with a rather convoluted story about a missing prince. Entertainment included a segment with horses – one that could walk on his two back feet and another that literally jumped in the air. (I know, I know, horses jump over things all the time, but this one jumped straight up.)  A falconer who had his falcon flying around the arena over our heads. Finally, the knights from the different sections competed for the championship.  Our’s did ok, but the king got angry with him and said he (the king) was boss.  Oh, well …

With much fanfare, the games concluded and we walked back through the crowded lobby and out into the still snow-filled air. (Once again resisting the offer to buy our quite good $20.00 picture with the queen.)

On the way home we stopped in a deserted land for our knight in shining t-shirt to conquer his own kingdom.

4 thoughts on “A KNIGHT IN SHINING T-SHIRT”