This afternoon I had the privilege of watching one of the semi-final matches of The National Bible Bee. Kids are participating in three age groups at the Marriott Renaissance in Schaumburg.

The competition began with 360 local contests with more than 17,000 kids involved. (The bee is associated with the Shelby Kennedy Foundation.) The top 100 participants nationwide (in each age group) are invited to the Nationals. Last year they were in Washington DC and this year in Schaumburg. 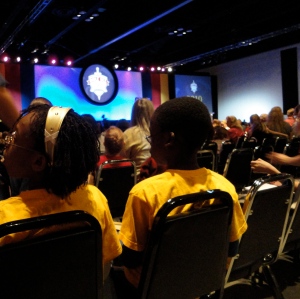 The round started with the grand entrance – all 100 kids competing in the primary round, marched in with great fanfare.

We then watched the primary semi-finals where kids from 7 – 13 went through five rounds of quoting Scripture – some passages 1-8 verses along. During the two hour time limit, only five kids were eliminated.

rattle them off, others would say them slowly and steadily, emphasizing each phrase, still others used a lot of expression, emphasizing individual words.

Then there was the poor girl who got a bloody nose and had to be on the jumbo screen with tissue stuck in her nose.

I had my camera, but the battery went dead after the three pictures above – unfortunately – because I could’ve gotten some cute pictures.

The Shelby Kennedy Foundation is not connected with Awana, but Awana is a sponsoring partner in the Bee.