WHERE: Up north. So, we were back from our quick trip to Michigan where I had a delightful time with Jeff and the munchkin – but I thought I should do something with the older munchkins, too. So, we decided to do an alphabet day.

WHAT: As we left the house, we said we wouldn’t come back until we did something that started with every letter of the alphabet – that didn’t mean a HUGE something, but just something.

KID FACTOR: You could do this with younger kids, but they might get tired doing 26 letters, so I would condense it to something like – “Do something that starts with each of the letters of your name.”

TWEEN/TEEN FACTOR: Both times I’ve done this I’ve done it with tweens/teens and I think all three kids involved had a lot of fun – at least they said and acted like they did, so I’m guessing they did. The fun part with older kids is that they can help think up things to do with the different letters or they’ll see something unusual and plug it into one of the letters. 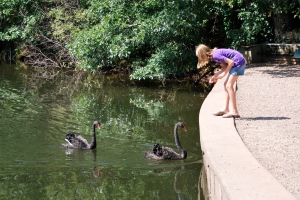 B – BREAKING RULES (this had something to do with unnamed munchkin hitting her golf ball in the water and then the two of them attempting to get to it – which the sign clearly said NOT to do.)

D – DEAD MANNEQUIN WATCHING (so we’re walking down the street and suddenly this mannequin falls over right in front of us.) 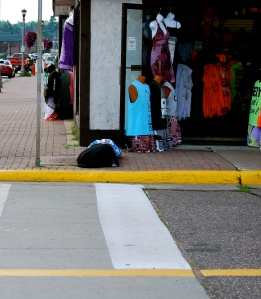 E – EYE ARTIST BOOKMARK (the lady in the gallery gave one of the munckins a bookmark – more about that later.

G – GIVING FLOWERS (this was very cool. We bought a bouquet of flowers and then went to a nearby nursing home and asked the receptionist to give them to a resident who was lonely and didn’t have family or friends to do things for her. We were met with a cheerful, “I sure will.”)

H – HAPPY BIRTHDAY, MUNCHKIN. (The entire day was a celebration of the munchkin’s big day.)

I – ICE CREAM EATING. (In her defense, she wasn’t eating two cones, but rather holding her sister’s while her sister went to get some water.)

J – JOURNAL BUYING – the birthday munchkin liked a journal (which she had seen and admired before), so it became her birthday gift.

K – KEEPING SMILES ON OUR FACE ALL DAY! 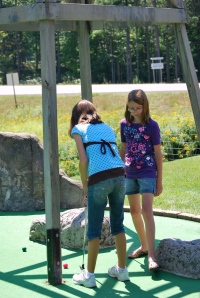 O – OUTSIDE DINING AT ISLAND CAFE 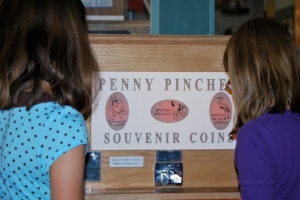 Q – QUESTIONING why there’s a crop of porta-potties growing in this field.

R – RECOGNIZING AN ARTIST  (as soon as we walked into the gallery and saw the display of animal eyes – one of the munchkins said, “I know who painted those!” and then correctly identified the artist. The owner was impressed. Here’s the munchkin with the artist’s book. 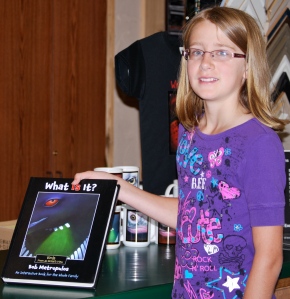 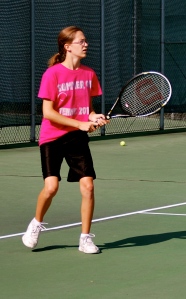 U – UNIQUE SIGN (We were just wondering how frozen custard parked.) 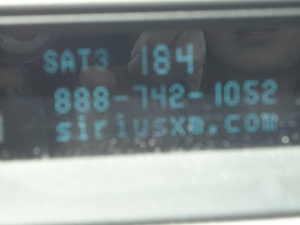 Y – YELLOW FLOWER BUYING (No, we didn’t cheat – we bought more flowers for the munchkin mom.)

Z – ZOO PARKING LOT VISIT (We didn’t go into the zoo, but we did see their donkeys and swans.)

Great fun was had by all.

WHERE: Once you cross the bridge and head west on Route 2, you will see the Manistique Lighthouse at the end of a long breakwater. Although we were there late in the afternoon, the sun play in the pictures is a result of a dark storm approaching, not so much the evening light.

WHAT: The lighthouse was to guide sailors who were going to and from Lake Michigan/Manistique River. The light was first lit on August 17, 1916 and went automated in 1969. The lighthouse keeper’s house was sold to a private citizen.

KID FACTOR: As I said, a storm was fast approaching and the waves were hurdling over the breakwater, periodically soaking us. My goal was to stay away from the splashes, but the munchkin had a great time walking into the splashes – which explains his very wet clothes. Their website does say it can get very dangerous when the wind is blowing and the water continually comes over the breakwater. While we were there, it wasn’t quite that bad, but the wind was whipping around. So, yes, fun for kids (even older kids).

WHERE: The Mackinac Bridge (pronounced Mackinaw) spans the Mackinac Straits, connecting the lower and upper peninsulas of Michigan. Prentiss Brown, a U.S. senator is the man who pushed and pushed (and when plans fell apart, pushed again) to have the bridge built.

WHAT: The five-mile long Mackinac Bridge is one of the world’s longest suspension bridges. An average of 11,000 people cross it every day – paying the $4.00 car toll.

FUN FACTS:  The first car to cross the bridge (November 1, 1957) was a dark green ’51 Chevrolet Styleline Deluxe. Albert Carter was the owner and his famous car is now in the Van Andel Museum Center (which is located in Grand Rapids).

To celebrate the first birthday of the bridge, there was a parade of 83 white oldsmobiles – each carrying a beauty queen from one of the Michigan counties.

KID FACTOR: The munchkin happily anticipated going on the bridge – and also skipping stones with his dad UNDER the bridge. Having the fort right there also helped his excitement. Of course, it’s also near Mackinaw City with mini-golf and fudge shops galore, so yes, good kid destination.

TWEEN/TEEN FACTOR: Every Labor Day, one side of the Mackinac Bridge is closed (as it has been since 1957) for people to walk across. The first year they had 68 people. Now they have between 40,000 – 80,000. It’s free and the web site gives parking instructions. I have friends that do this and it sounds very fun. I would think this would be a great family activity – including tweens and teens. And, you get a certificate to show that you’ve done it. 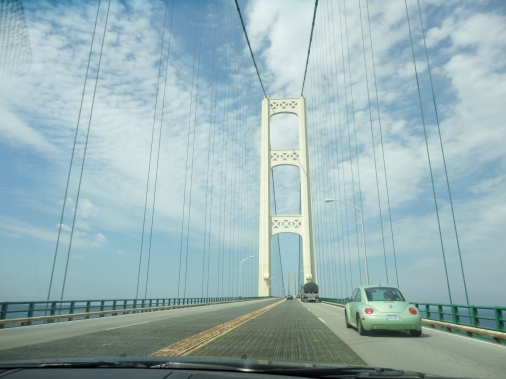 Our next stop was Fort Michilimackinac, tucked under the Mackinac Bridge. (Of course, when it was tucked there, there wasn’t a bridge. Maybe the bridge tucked over the fort.)

This was actually a French fort and then a British Fort that was used, not so much for military purposes, as it was a trading post for those traveling from the St. Lawrence to the Mississippi River via the Great Lakes and Illinois. Located strategically on the shores of the Straits of Mackinac, it would be a location most every long ago traveler would pass.

The fort is well done and on the day we were there, had quite a bit of activity including cannons, open fire cooking, musket shooting, and a short history lesson by a young British couple and a Native American. And – the munchkin signed up to join the British army.

We also found humor in watching the one very talented staff member who ran from activity center to activity center – he was welcoming us, explaining canons, signing people up for the army and then much to everyone’s enjoyment, broke down in laughter as he and his fellow “soldier” attempted to shoot the muskets.

Yes, I would recommend taking kids there, definitely. The munchkin was much entertained.  And the view itself is worthwhile.

The day was cloudy.

But we were enjoying ourselves by the Mackinac Bridge.

Here’s the lighthouse. You can see the bridge in the background.

Since we were there  – in Tuscola – we had to stop by the Tuscola ballpark.

More kids play at the ballpark than there are people in town (literally).

I remember well wandering (well, mostly we rode our bikes) down to the field on any given summer evening to the smell of popcorn (sometimes I worked in the booth and helped make it) and to the PA system broadcasting the name of the next batter.

This is the ball field where I batted lead off and played first base. (And our team wasn’t all that bad, either.) This is where Ken taught me to hit down the line to right field. This is where Kelli had her first softball experience.

The now fieldhouse – where more than 600 kids register for ball each summer – was then the school where my kids went to first grade.

A visit to Michigan is not complete without a visit to Bronners  – actually only a few miles from where we used to live.

The best time to go is a hot, hot summer afternoon. Air conditioning and Christmas will at least help you feel a little cooler.

We headed to the Hampton in Lansing – much nicer and much, MUCH cheaper than the HIE in Ludington. We were on our way to the Lansing Lugnuts who play at a park with the catchy (sporty) name of Cooley Law School Stadium. The guy at the  Hampton Inn desk was so friendly and helpful as he gave us directions that both Jeff and I thought he was going to invite us to his house. (Literally.)

So we made our way to the Lugnuts – a team that plays in downtown Lansing in an area that has recently been rejuvenated.  In fact, they built condos on the parking lot so parking can be a problem. (Think Wrigley though not quite as bad as Wrigley.) Actually, I later learned that it was easier for us to find parking because we went on a weekend when companies opened their parking lots. Weekday parking is more challenging. By the way, Lugnuts are a Toronto Blue Jay minor league team.

Funny – my seat had ivy growing up the side – only seat I saw that did so – sort of a piece of Wrigley at Cooley.

The game was fun. Lugnuts played the Silver Hawks and won. Then we watched the obligatory minor league fireworks.

The picture says it all – 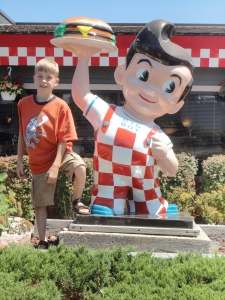