So, a break from the trip out East to talk about pumpkins or rather look at pumpkins.

A friend and I went to Sycamore last Saturday to see the unique pumpkin creations – something Sycamorians have been doing since 1962,

The weather was beautiful, the hot cider was delicious and chatting with the Christian teens we met (who were there on a youth retreat) was a delight.

A sampling of the pumpkins …

Seems sad to be writing about Jamestown on this Sunday when they are being drenched with Hurricane Sandy. In fact, this is the notice on their website.
CLOSURE ALERT: Due to the anticipated storm, Historic Jamestowne will be closed to the public on Sunday, 10/28, and Monday, 10/29. The Dale House Café will close at 2 pm on Saturday, 10/27 and will remain closed through Monday. Historic Jamestowne will reopen once storm damage assessments and cleanup have been completed. The Colonial Parkway will remain open, however motorists should be aware that downed trees may ultimately make the scenic byway impassable.

The Historic Triangle Shuttle and Jamestown Area Shuttle will not operate on Sunday or Monday.

The Colonial Parkway is a beautiful road, umbrella-ed by oaks, maples and other tall, leafy trees … hopefully not too many of them will be damaged.

Again, the day we were there – just a few weeks ago, the weather was beautiful. We enjoyed  lunch right on the site at the Dale House Cafe which had sort of cutesy Jamestown names like Old Dominion, John Rolfe stew,  Lady Nelson Quiche, etc. I think I had the roast turkey/cranberry sandwich (Oops! I mean the U.S. Grant), I don’t remember for sure.

What I do remember is sitting out on the patio, watching the boats go down the James River.

The view from our table …

WHERE: Southeastern Virginia – in the triangle with Williamsburg and Yorktown

WHAT: A National Historic Site where constant archaeological research is happening in search of more information about the Jamestown history.

KID FACTOR: Lots of room to run, but probably not as fascinating as the settlement which has reproductions of the village, ships, etc.

So much of our trip was in the rain – but on this, the one day spent walking around – the weather turned absolutely autumn gorgeous! Considering our rather sleepy state of mind, just wandering throughout the site was refreshing and fun.

Here is something you need to know about visiting Jamestown.

You have a choice.

Historic Jamestowne (yes, with an “e”) is further down the road on an island and is a National Park.

Jamestowne Settlement is not on the actual site of  the original Jamestowne.

Kids would probably enjoy the Settlement more than the National Park … but we went to the park … which is actually an archeological site.

In 1607 the colonists sailed down the James River on the Susan Constant, Discovery and Godspeed and landed on the strip of land which became known as Jamestown – Here Virginia was born with the settlement as it’s first capital. Jamestown is also considered the first permanent English settlement in all of America.

The story of Jamestown is not a happily-ever-after tale, however. With disease, malnutrition, poor leadership and a horrible drought, only 60 of the original 200 made it to the year 1610. The colony did rebound, but continued to struggle – and by 1699, the capital was moved to Williamsburg and Jamestown disappeared.

The story of Jamestown is a fascinating one and a good glimpse into the history of our country.

Even though the first five people we talked to were clueless about the sand sculptures, we were determined.

Finally someone directed us to the end of the board walk where we found a huge tent AND a lot of people.

The “master” sand sculptures were protected inside the tent and it did cost us a few dollars to enter, but worth it to see something unique.

Sculptors from 10 countries were represented and the prize money is the largest awarded for this type of competition in the US, but I have no idea what that amount is.

The lighting was challenging – the sides of the tent were open and rain was falling intermittently so everything was overcast – and since I knew I would not be saving any of these pictures other than for the blog – I just went with it.

I wanted you to have a look at the unbelievably intricate work.

So have a look.

I had asked one of the leaders at the conference where a good public beach was located so that we could drive down on Sunday morning. She said, “Oh, Virginia Beach is the best.” A leader standing nearby agreed and then excitedly added that we would hit the last day of the Neptune Festival. “You’ll get to see the sand sculptures.”

We didn’t know what the Neptune Festival was, but the sand sculpture part sounded good.

So early the next morning (well, about 3:a.m., but that’s a whole other story), we headed out. We dropped B. from Headquarters at the airport and then headed south toward Virginia Beach. We did a Starbucks run and put in a CD of Dr. Jeremiah for our mobile church service and drove through unfamiliar streets and towns.

And found the beach. And the festival. And the ocean.

But the first five people we asked had no idea where any sand sculptures would be.

First things first. Although the night before Barb had seen lights reflecting in the ocean – this was the first true look and we needed to find a place where she could dip her toes.

The conference was great as were the friendships we made with staff. I don’t say a whole lot about conferences because I make it a rule not to talk about the people I meet. I don’t want to invade anyone’s privacy. And since conferences are people, that doesn’t leave me much to say..

However, we did have an interesting experience after the conference.  I was with Barb and with Betsy – a friend from HQ. Neither of them had seen the Atlantic Ocean before. Barb and I were planning on going the next morning, but Betsy was flying out at six in the morning. So I said I’d take them out that night.

Since it wasn’t very far away (and since I have a compass in my car and knew I simply needed to head East) finding it wasn’t all that difficult – problem was – it was very, very dark out.

So what they saw was lights reflecting in – what had to be ocean water.

The entire day was good.

Once again we drove through the city instead of doing the bypass – Richmond, Virginia.

Another city. Another skyline.

WHERE: Appomattox Court House between Lynchburg and Richmond, Virginia

WHAT: The Village where the agreement was signed to end the Civil War.

KID FACTOR: I’ve been to a lot of historic sites and I think this would be a great one to take kids.

First of all, there’s a lot of land and a lot of paths to walk. Kids could let out energy, especially if you’re on a road trip. Also, you aren’t simply walking through one big house with lots of fragile antiques around.  Yes, there are things you can’t touch, but you can easily steer kids away from them.

Second, the Civil War is an event kids should know about.

Third, the agreement was settled in a polite, kind way. Grant respected Lee and along with Lincoln, wanted to begin the reunification of the country. Relating to kids the details of the signing can be a good lesson – especially in light of all the animosity we hear today.

1. After the agreement was signed, soldiers from both sides gathered at the McLean home to renew friendships and reunite with families.

2. The terms of peace were kind. The message was that the nation could now rebuild as one – not one of revenge.

3. Thomas Tibbs owned a farm near Appomatox Court House. He fought his last battle on his own property.

4. Lee and Grant met one more time after leaving Appomattox. When Grant was president, he invited Lee to visit the White House and Lee came.

5. The oldest building at Appomattox is the Clover Hill Tavern (1819). You can go inside – which we did.

6. Ely Parker, a Seneca Indian, wrote out Grant’s formal agreement. Lee said to him “I am glad to see one real American here.” Ely replied, “We are all Americans.”

7. Custer (yes, THAT Custer) received the flag of truce at Appomattox.

8. Custer died fairly young (as we all know) and his wife Libby then possessed the table from the McLean house where the agreement was written. She wrote in her will, …the table on which the surrender of General Lee to General Grant was written…and now located in the… War Department Building in Washington, D. C., I give and bequeath to the United States Government…”  The table is now in the Smithsonian. ( I remember reading Libby Custer’s biography when we lived in Michigan. Interesting lady.)

9. Appomattox Court House was originally named Clover Hill after the tavern. This was a stop on the road between Lynchburg and Richmond.

10. Not all the regiments got the message that the war was over and many still fought for several weeks. In actuality, the Confederates won the last battle of the war.

11. Lula McLean (7 year old daughter of Wilmer) had been playing with her doll in the parlor before the excitement. When the agreement was signed, one of the soldiers picked up the doll and started tossing it around to the other soldiers. The men called it the silent witness. One of the men (Captain Moore) took the doll home with him as a souvenir and the family actually kept it for more than a century, recognizing it’s importance. (Most everything in the parlor was taken as souvenirs.)  Lula never saw her doll again, but the doll was donated back to the park in 1992.

12. One of the members of Grant’s staff present for the signing was Lincoln’s son, Robert.

(Much of this information is from the Appomattox Court House National Historic Site web pages as well as a few other places.)

Village of Appomattox Court House today – the courthouse/visitor’s center to the right, Plunkett/Meeks store to the left. Clover Hill Tavern in the back right and the gift shop straight ahead. (I imagine the gift shop did a big business on the day of the  signing :).) 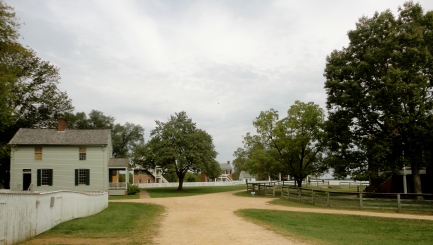