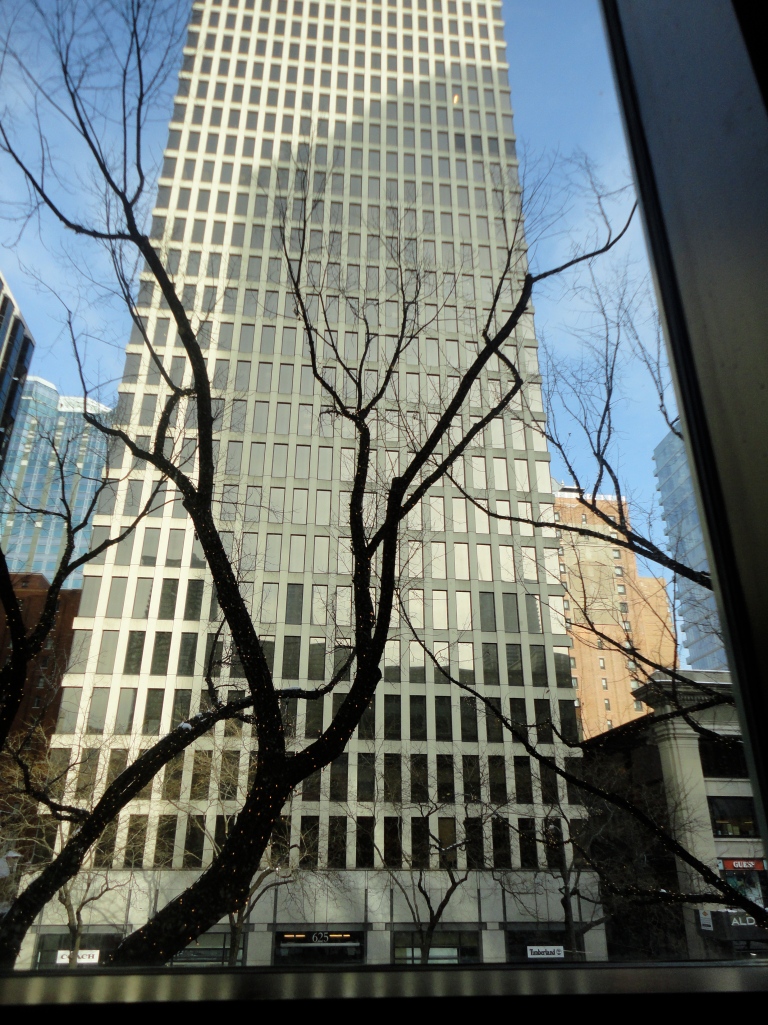 I’m not putting up all the pictures I took in Chicago because I have posted many Chicago pictures in the past.

But here we are on top of the Willis Tower – on the edge of the ledge. And no, stepping out on the ledge doesn’t bother me. I feel safe and if I feel safe, I’m perfectly fine with height. After all, where else do you get such a great view than being skyhigh?

“Well, if you’re a native Chicagoan, you know how dumb he [Dr. Robert Hartley] is. He gets on the Ravenswood El, he goes past his stop on Sheridan Road, he gets off in Evanston, where the El is on the ground, and then he walks back 55 blocks to his apartment. Now, would you want to have that man as a psychologist? A man who misses his stop every day?”     (Bob Newhart)

over harbor and city

and then moves on.

We did finally make it to the Mississippi – and we actually did see a few eagles. The day was still pewter-gray, but dismally fascinating.

Two hours, 15 minutes into our tour we hit the Chautauqua room which had some fascinating models of Dixon and the Rock River Assembly. Again Bill explained everything in detail — until we finally decided that we truly had to go.

Which meant that we never did get to the Smithsonian Space Exhibit.

Or the Walgreen room because Charles Walgreen also came from Dixon.

So we did a quick trip through the gift shop. 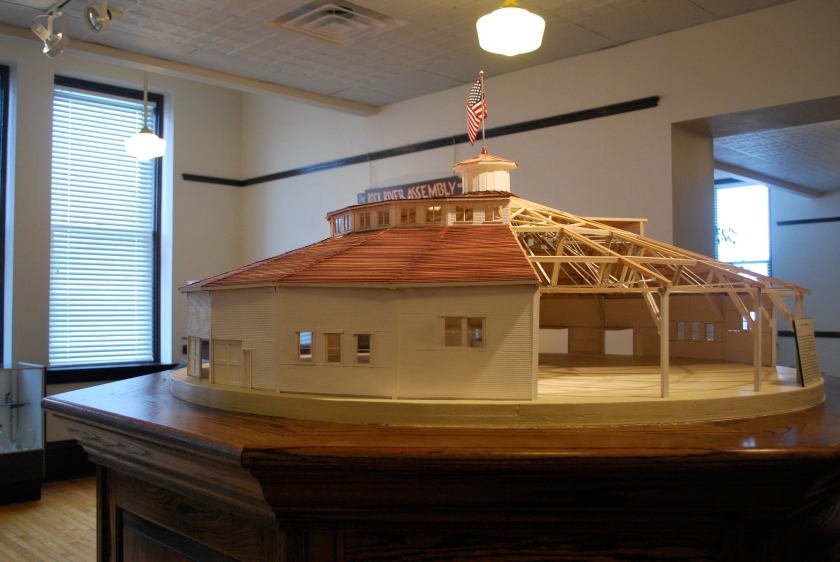 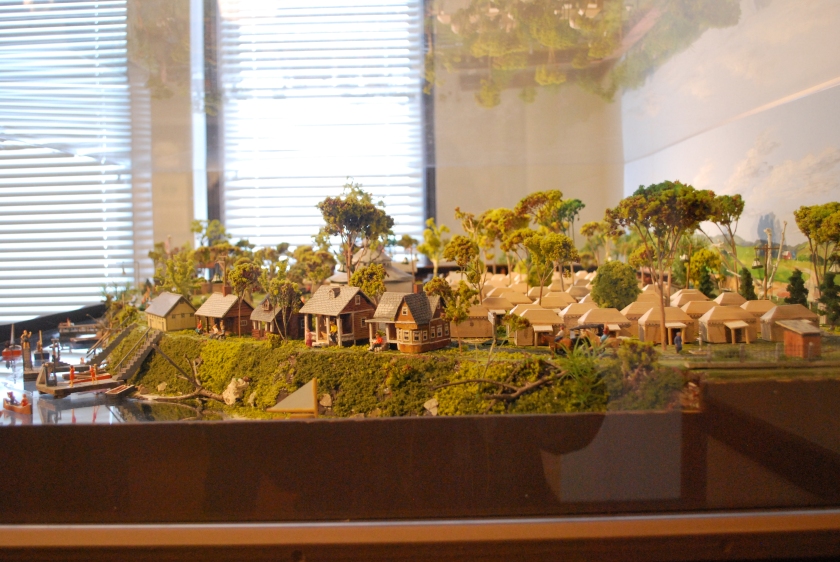 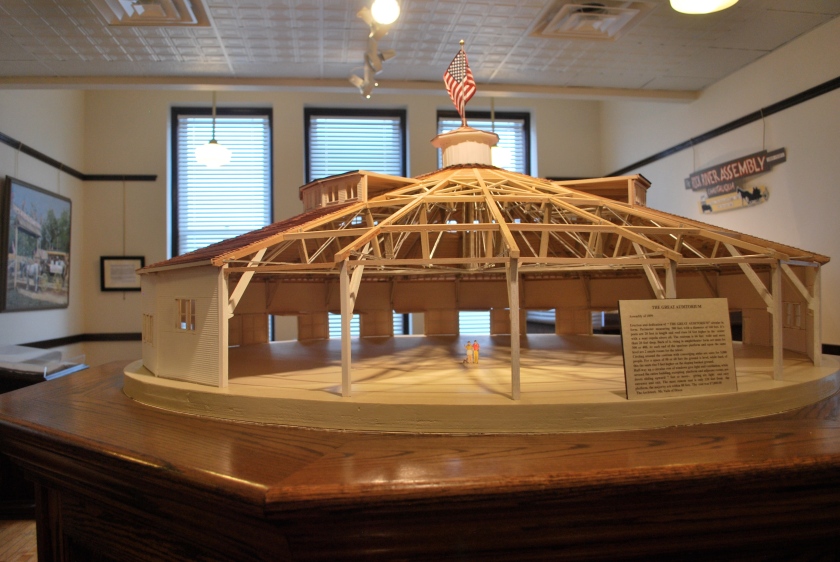 By this time we had been on our run-in-run-out-ten minute tour for more than a hour. After the farm exhibit was the Reagan sixth grade classroom, fixed up exactly like it would’ve been when Ronnie was a sixth grader. From there we went to the Reagan room that was all about his history with many certificates and memorabilia that he donated.

Our tour guide Bill was in his element – he knew Reagan and had spent five days with him in his Simi Valley house. He was very excited to tell us everything he knew.

Our run-in-run-out tour was now up to two hours – and we had learned a lot.

So, after determining that the Reagan house didn’t open to April and deciding that we didn’t want to stand on South Hennepin Avenue waiting until then … and after taking pictures of the house from all perspectives (being that there are only SO many ways to take a picture of a white house in a snowstorm) – we moved on.

I was disappointed I couldn’t show my guests  Reagan’s home (since who knows when they’d be up here from South Florida again), so I told them we would meander down through town. I knew of some other sites – like his church and his school that we could at least see from the outside.

But when we got to the school we noticed a sign that said “Historic Center” and “see Ronald Reagan’s sixth grade classroom.”

“We could go see what this is all about.” I suggested.

The building was a typical, early 1900s, two-story brick school building and I figured we would see a classroom, a couple black-framed pictures on the wall, be out of there and head west.

We walked into an empty hallway with a gigantic picture of President Reagan made of Jelly Belly candy (like the one at the Jelly Belly Factory). A lady came out of one of the rooms and told us that there were more exhibits on the second floor including the classroom and “that if  Bill were here he could tell you exactly what they were.”

Magically Bill appeared. (We’re still trying to figure out if he just happened by or if she called him and told him to come.)

He led us upstairs and explained that when the town began restoring the Reagan house, Reagan realized they needed some monetary help so he called his friend Mr. Wymbs. Mr. Wymbs did see to the house restoration and then realized that the South Central School building where Reagan had gone as a child was falling apart – so he also restored the school.  Reagan’s sixth grade classroom was renovated as was the school gym. A Reagan memorial room was created with lots of artifacts, movie posters, etc. (Reagan helped by donating a lot of personal items.)

But more than that – a not-what-you’d-expect-to-see-on-the-second-floor-of-an-old-school-building diorama of Blackhawk history was tucked away on one side of the hall. Except the exhibit is state-of-the-art costing millions of dollars and looking like it belongs in the Lincoln Museum in Springfield. That exhibit goes right into an Illinois farming exhibit – again unbelievably surprising for what you’d expect. The dioramas include talking mannequins (which sound sort of robotic, but still …) and are bordered with prairie grasses complete with ladybugs and snakes (which Bill pointed out to us).  If you’ve been to the area before (as I have) and haven’t noticed this building – these latest exhibits just opened earlier this year.

The museum, in fact, is now an affiliate of the Smithsonian, a designation that actually took them 20 years and now allows them to offer visiting Smithsonian exhibits and I guess, so they say, is quite an accomplishment.

Here are some of the “views” from the Blackhawk exhibit. 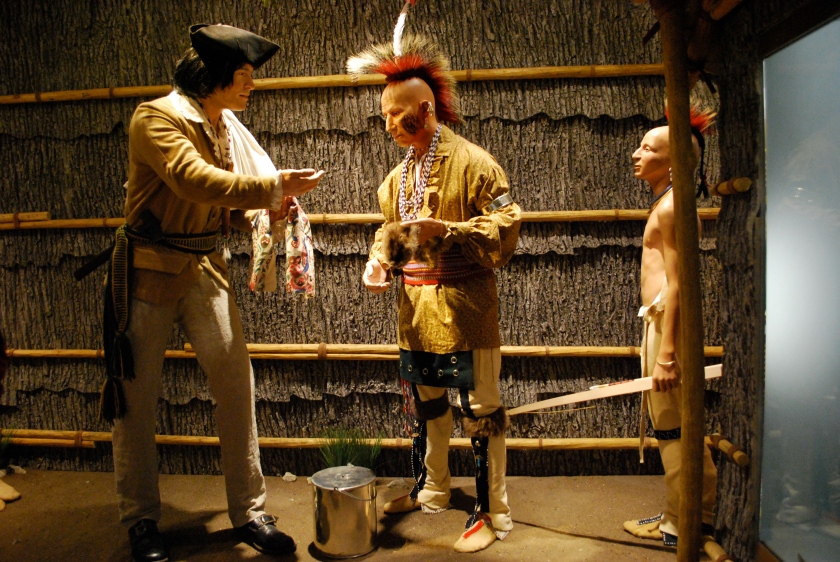 After Summit two South Florida friends stayed with me for a few days – which was fun since this was the first time the one of them had ever walked in snow, felt snow falling on her or seen snow that deep on the ground.

And my goal was to give them the true northern experience.

So the next morning we headed west. Our first stop was Reagan’s home in Dixon. Even though I’ve been there several times, it was worth going again to show the southern ladies –  except Reagan’s home is not open to April. Still, we got pictures. After all, I’m sure that sometimes Ronald played in the snow as a kid – so we at least saw the yard. And I’ve put pictures up before – but I think they were in summer – so these are my winter Dixon pictures. 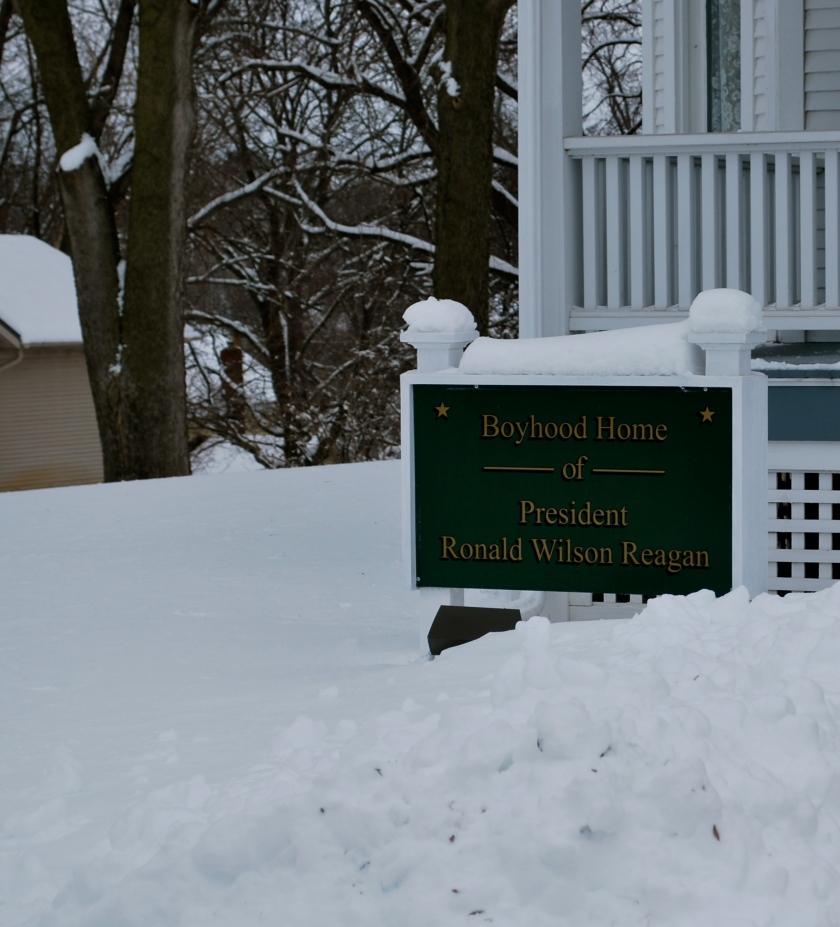 Summit – hundreds of teens, in jeans, t-shirts, long dresses, matching outfits – depending on the moment of the day. Are they relaxing with their team, getting ready for their fine arts presentation, getting ready for volleyball or AwanaGames or reviewing all the Bible quiz questions?

We had an added attraction this year – a semi-major snowstorm. Not so significant to us, but when you live in South Florida, Arizona, Texas or Georgia snow was a big deal. Some of the teens had never before been in a snowstorm, seen a snowplow or had the opportunity to build a snowman before.

My very favorite part of Summit is the creative writing  competition. I enjoy encouraging teens in their journey to appreciate words – and we had some good submissions this year.

So all in all, four days in the Anawa My booth – oh, make that Awana YM booth – was lots of fun.