On our brief two-hours of free time in Florida – we (Karen, Roger and I) headed to Kissimmee and The World’s Most Unique Monument – something Roger had found on the web.

The most unique part of the monument was the few Weddles represented – including a JW Weddle. No, we have no idea who these Weddles are – but interesting …

Here is the story of a wacky tourist attraction.

The idea for the monument came right after Pearl Harbor was attacked in 1942. Dr. Charles Bressler-Pettis, who like to boost tourism for his hometown (Kissimmee, Florida) was motivated to do something patriotic for his country.

So he collected rocks. He wrote to every governor of every state and asked them to send him rocks. And soon he began receiving packages in the mail: small boulders, native granite, quartz, chunks of old buildings. He even received a rock from Roosevelt’s Hyde Park estate.

When Dr. Charles had received rocks from all 48 states, he mortared them together into a tower of concrete slabs. The slabs included the rock, the origin and the name of the donor. At the top of the monument he wrote “Tourist Paradise.” The monument was dedicated on March 28, 1943 as the World’s Most Unique Monument.

Dr. Charles died, but stones continued coming. Workers embedded them into the surrounding walkways and the monument was a HUGE tourist attraction before Disney.

But Disney happened and the monument looked more and more dilapidated and The World’s Most Unique Monument was all but forgotten.

Then 9/11 happened and patriotism was again in vogue. An automobile association and the Hampton Inn Landmark Project gave the monument a facelift. (Hampton Inns regularly donate money to refurbish historic landmarks that have fallen to disrepair.) A new flag was placed on top and needed paint was added to the stones.

And so it stands –  a truly unique monument to the States

So one morning while we were in Florida, we actually figured out that we had a couple free hours and so took advantage. We saw a monument (more about that later), sandhill cranes and a huge orange building – Eli’s Orange World.

Think kitschy Florida. Think alligator necklaces, jerky and teeth. Think all things Disney. Think every retro souvenir you can think of – and you have the gift shop.

But they also had oranges … and more oranges. They give samples of their oranges, sweet, juicy samples. And they sell orange juice. I bought a bottle – and it was delicious, just as they promised.

If you’re in Kissimmee and good oranges and a trip to retro America – stop at Orange World. 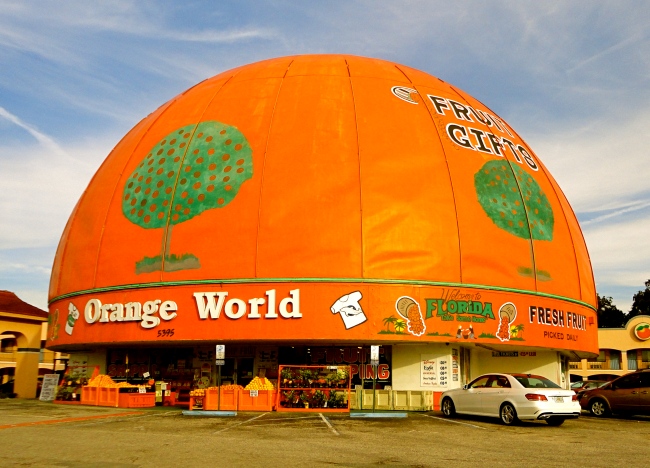 Another gold-mining town we visited last fall was Columbia, California. Part of the town – is part of the Columbia State Historic Park and has some of the original buildings. The day we were there, was quite crowded because Yosemite was closed during the whole close-the-National-Parks-and-save-money thing or whatever — so tours were bringing their visitors to Columbia. Not quite Yosemite, but an interesting place.

Once gold had been discovered back in the mid 1800s, thousands and thousands of miners came to to town and by 1852 Columbia had 8 hotels, 4 banks, 2 bookstores, 3 churches … and more than 40 bars and other places you could get drinks.

In the years between 1850-1900 – 150 million dollars worth of gold was mined near Columbia … and is in fact, how the North funded the Union Army the Civil War.

A very energetic place. In fact, during its peak, Columbia was the second-largest city in California and was considered for the capit0l, but alas …

Some pictures of Columbia …