The 10-year-old munchkin asked if I would take him to the Lego Discovery Center for his birthday (which was actually back in February). I said, “yes.”

I had checked it out before and most reviews talked about it being overpriced, but if you went later in the day you saved $2.00 per ticket. So – the dilemma – go early and pay more or go later and experience rush hour. I’ve been in the area for rush hour before and know you often have to wait bumper to bumper to get back on the highway.

So we went early – on a Saturday.

You gotta figure – How great could this place be when it’s stuck between two other stores in a strip mall?

The first area we went into was the Lego Chicago which was my favorite display of the entire place. From there, we went through a jungle area and then a Star Wars area. We also went on two rides – the first where you go through a tunnel and shoot at displays and another ride that goes round a center pole and the harder you pedal, the higher you go. Maybe or maybe you just go high and low no matter what you do.

We skipped the 10-minute 4D movie since the munchkin doesn’t like 4D and I’m not all that crazy about them myself.  The “factory” tour was sort of pathetic and took about three minutes.

Next we stood in a line waiting to go into a room and get a lesson in Lego building. We were all given a little bag filled with about 12 pieces and learned how to make a giraffe. That was all well and good and cute – but to actually KEEP them, we had to pay $5.00 for each bag. If we didn’t want to keep them, we had to take them apart and stick the pieces back in the bag for the next group. (Don’t even think about the germs.)

We wandered through the gift shop which is not as big as the downtown Lego store or the Disney Lego stores either.

But it wasn’t really a negative experience. The munchkin had fun and I had fun with the munchkin and liked seeing him having fun, so I was ok with it all.

We then went across the parking lot to the Rainforest Cafe – which was also fun. 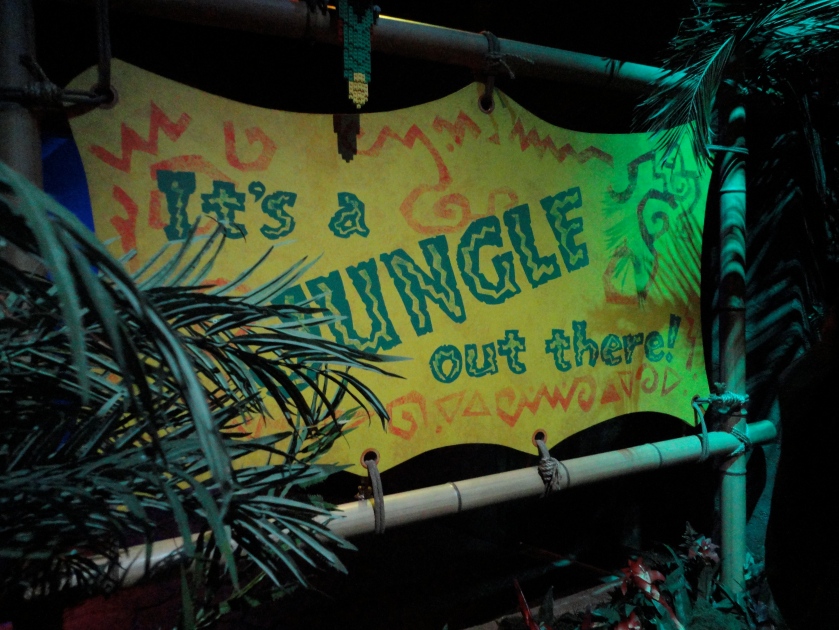