I have many pictures of the Colorado Mountains … and Garden of the Gods … and Mesa Verde, but one of the unique, fun things we did last time we were in Colorado was visit the Olympic Training Center in Colorado Springs. We saw Olympic greats and Olympic hopefuls practice. The tour guide told us about their diet and some of the more well-known Olympians who had stayed there will preparing. We watched swimming, volleyball and wresting. Jacob ran down the track, perhaps one day dreaming of being an Olympian. He was 3 then, and since then, at 13, has won a half marathon … so who knows.

And because we were there on Jeff’s birthday, I bought him an official U.S. Olympic curling team t-shirt. 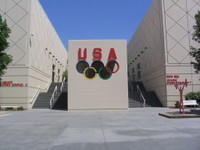