The day Barb and I rode up to the tip of the Thumb to see Lake Huron, we found ourselves in the middle of the annual Caseville Cheeseburger Fest which had something to do with Jimmy Buffet, flamingos and a lot of people.

I have not been to a Cheeseburger Fest before and can’t say it was ever on my to-do list, however, just looking at the stuffed flamingoes thrown over the light poles was rather entertaining. I could see no pattern to them – but rather it looked like some little kids were playing and tossed their stuffed birds into the air.

At that point, we kind of ran out of things to do that were cheeseburgerish and so continued on our way. 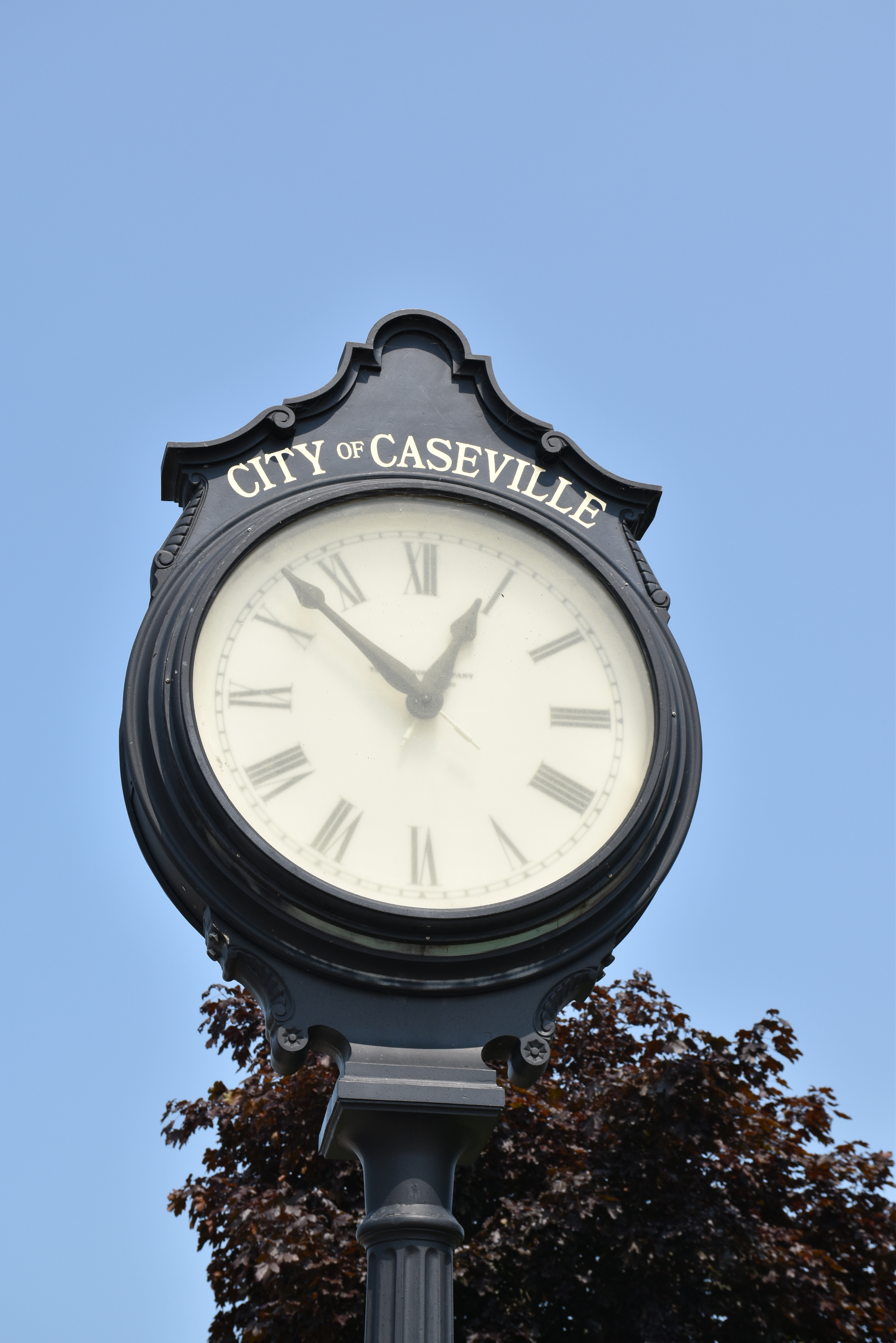 I’ve lived a lot of my life by Lake Michigan and a little of my life near Lake Huron.

Last week when I was in Michigan, Barb (great friend) and I headed up to the tip of the thumb. (The lower peninsula of Michigan is in the shape of a mitten and we lived in the thumb. Yes, that’s what it’s called – the Thumb Area.)

On the way we passed the Octagon Barn. You can take tours and Barb said it it’s fascinating inside, but unfortunately it was closed. As we walked along the fence line, a lady from inside (maybe owner) came and talked to us and gave us some suggestions about what days we could come back, but alas … 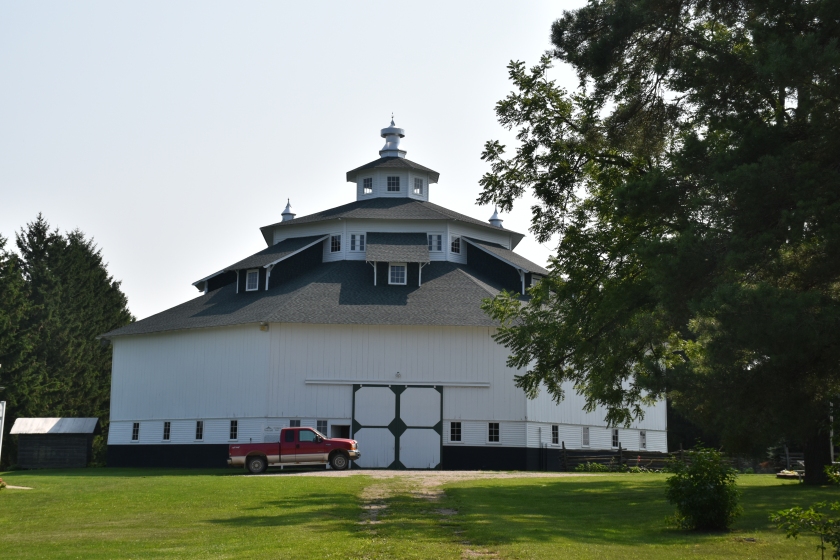 So we continued on our journey until we reached the lake in the town of Caseville. The afternoon was warm, but the lake breeze was refreshing.  Pretend you’re there. Pretend you can feel the soft wind blowing your hair. Pretend you can hear the waves against the shore and plop, plop, plop of the boats as they sped across the water. And enjoy. 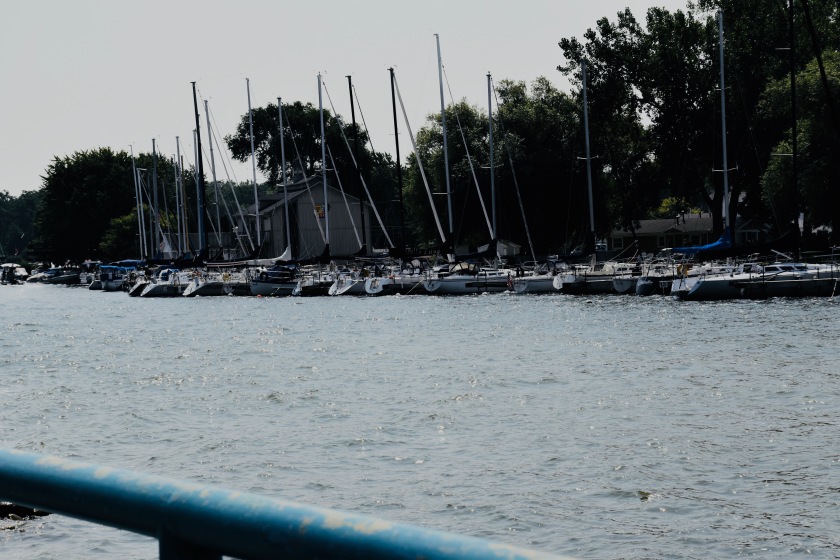 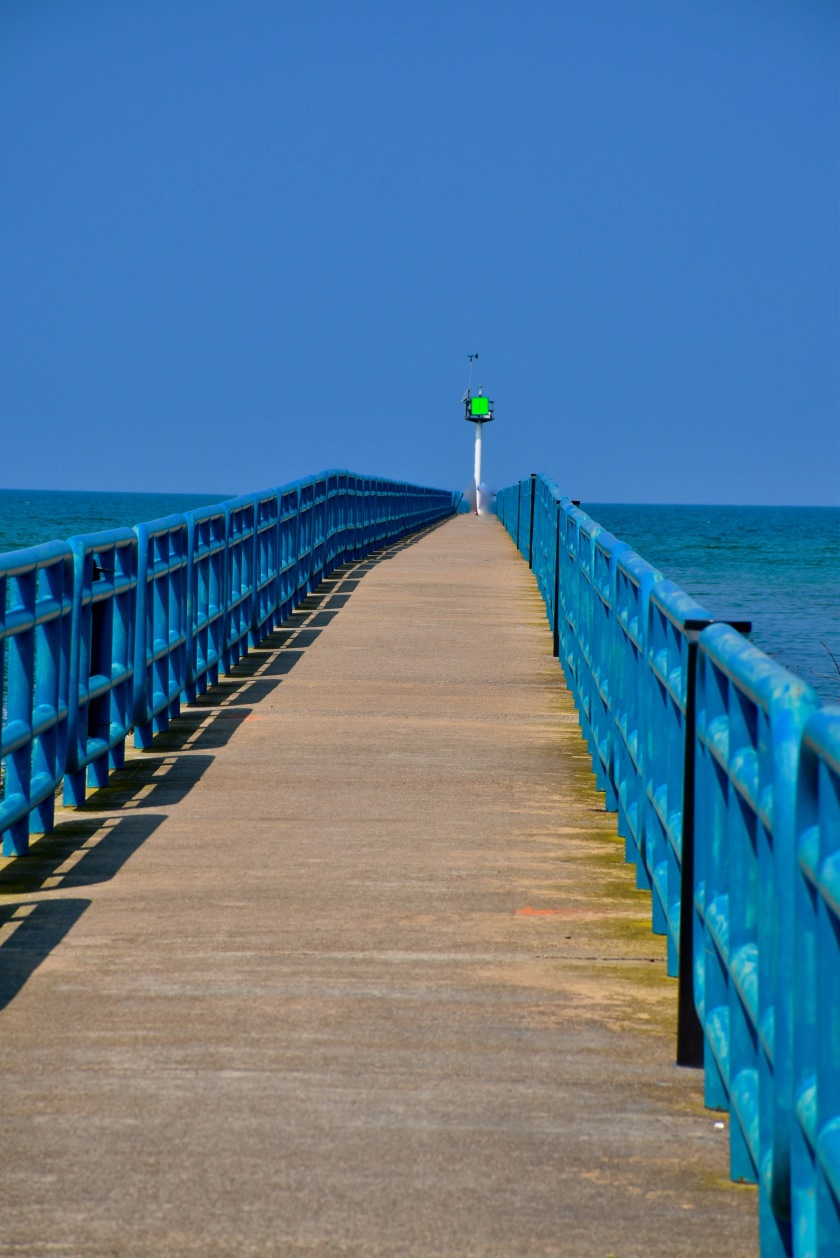 Last time I drove home from Michigan, I was with a friend; a friend who likes chocolate. So when we saw signs advertising The Chocolate Garden, we were intrigued. We got off the exit and headed down a country road. The place wasn’t too far off the highway, but the rural atmosphere of the location made us think we were in the wrong location.

Then we saw the house with the Chocolate Garden sign. So this time, knowing where I was going, I drove right to it.  Also, there was a lot more activity on the road, with people picking fruit at the neighboring apple orchard. 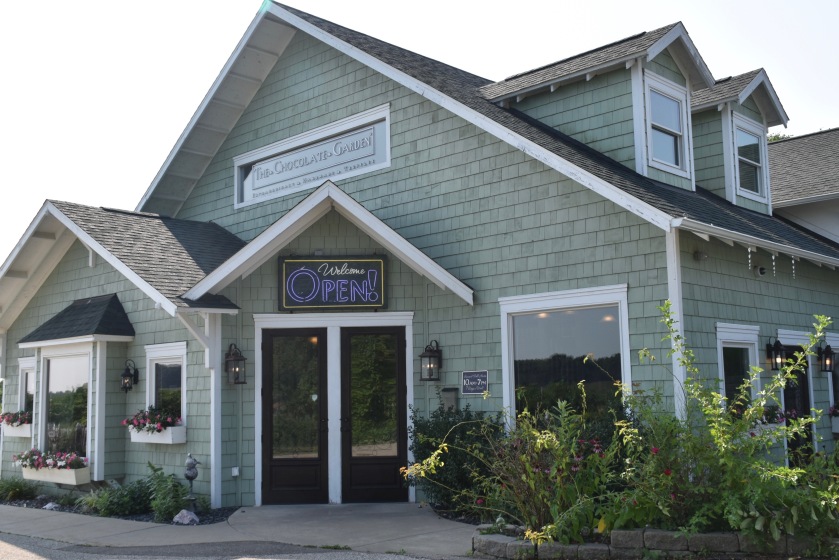 This isn’t just any chocolate shop – they only sell truffles (and a few home decor-type items). The truffles, however, are so good, they’ve been featured on Food Network, and the Chicago Tribune.

To discover which truffles you’d like to buy –  for $2.99, they will allow you to taste test three different kinds. You read what’s in them and then list the three you’d like to try.

So if you’re heading up #94 through Michigan, here’s another place to stop.

I knew before I left to travel north through Michigan earlier in the week, that I would have some extra time before meeting friends. So before I left,  I checked out the web for some place I could hang out for awhile and take some pictures. I found the Historic Bridges County Park which highlighted  — ahhh … historic bridges.

I knew it was off 94 near Battle Creek, but that’s all. My GPS led me down miles of bumpy roads greatly in need of repair. I thought about turning around, but kept thinking I had to come to the park behind the next bend or the next bend or maybe the next bend –

And then I was there – at a beautiful landscaped area next to the Kalamazoo River. The parking lot was full. People were there mostly to canoe and kayak  down the river. The river itself was so clear, you could distinctly make out every rock on the bottom.

A boardwalk snaked off from the picnic area through fields of flowers and cattails. The afternoon was bright with sunshine enhancing the summer day.

I saw trails going back into the woods, but I stayed near the park area where four of the bridges were located.

If you’re traveling north on 94, and you want a place to hike, or picnic, or just sit and watch the lazy river go by, here’s your stop. And, I think there’s a playground area, too. I didn’t go in the restroom, but other reviewers say they are large and clean. I was glad I took the time to stop. 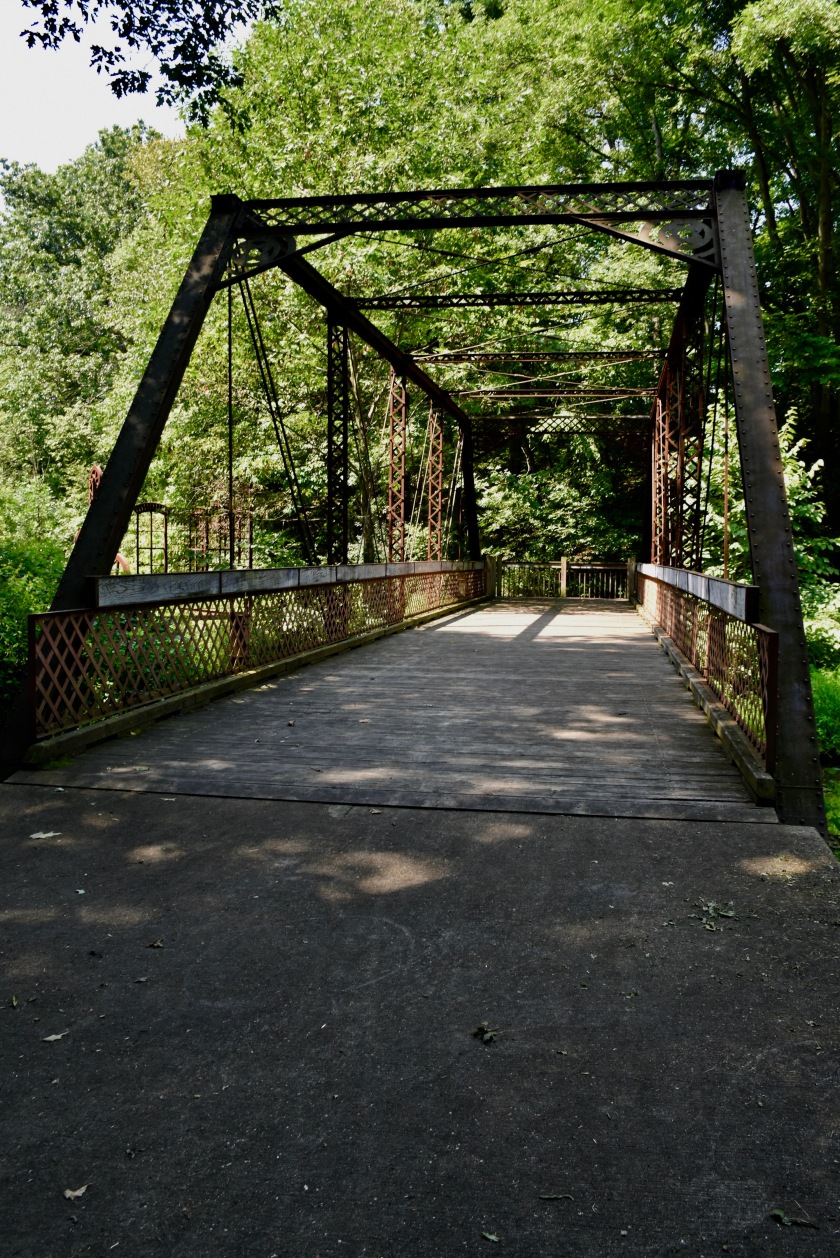 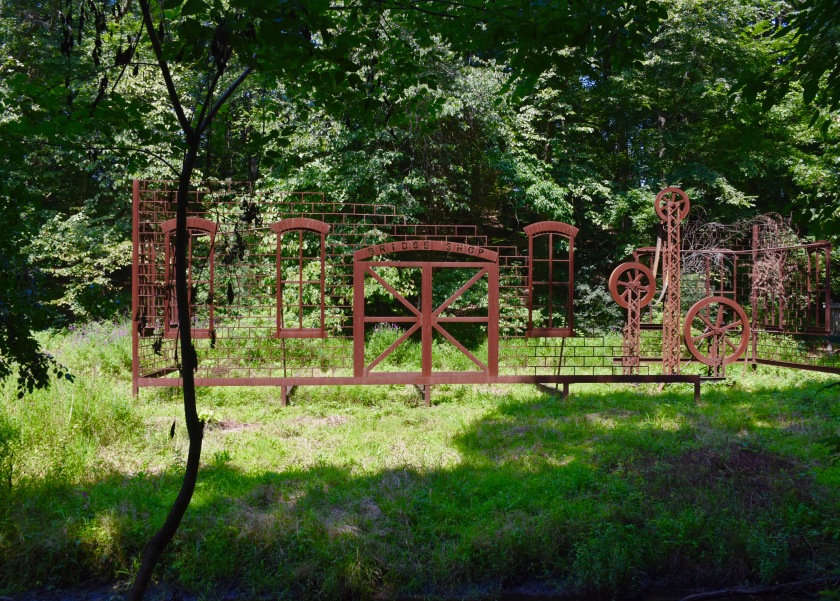 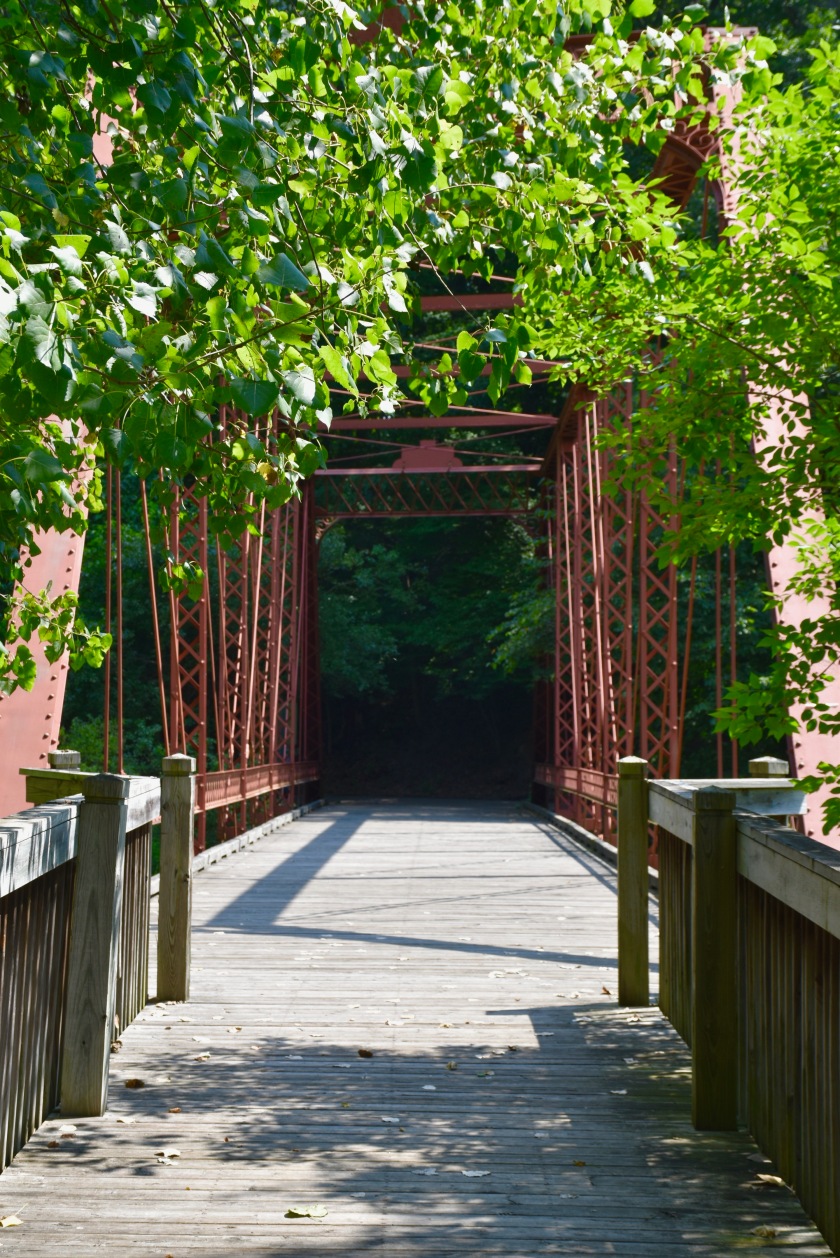