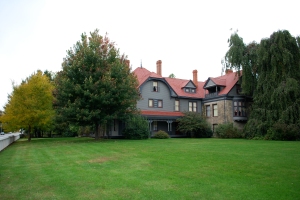 On the way home from Pennsylvania we decided to go north instead of south. This had something to do with soup and Max and Erma, but I’m not sure what.

North meant the tollroad. My growing-up family used to go back and forth from Illinois and Pennsylvania on the tollroad three or four times a year, but it had been awhile and I hadn’t driven it before. However, the tollroad had a lot less traffic than 70 and with my iPass, I didn’t have to stop at any tollbooths – so it was actually an easy drive, much better than the rain-drenched ride east.

Anyhow, as we were traveling, Kelli was reading the map and I mentioned that one of the few president houses I hadn’t been to was Garfield’s, tucked away in the northeast corner of Ohio. Kelli found the location and then Kelli said, “So, let’s go to today.”

“Sure, it’s not that far out of our way.” Then to help the munchkins get excited about a visit to an old house, she said, “Hey, guys. If we visit the president’s house, it will count as school and you won’t have to do your math.”

That clinched the deal. 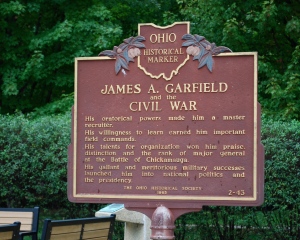 Actually, I put it right up there with Hayes as one of my favorite houses – big, but not huge and with a “cozy, family” atmosphere. 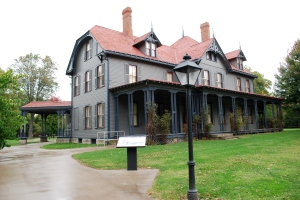 Here are some Garfield/Lawnfield facts.

*Garfield was the last of the presidents who were born in a log cabin.

*Garfield was president for approximately 200 days before being assassinated by Charles Guiteau.

*Garfield was the only ordained preacher to hold the presidency.

*Garfield married Lucretia Rudolph, the daughter of a prominent family.

*All five Garfield children were successful.

*Lawnfield was lived in by Garfields until 1930 when it was turned over to the Western Reserve Historical Society as a museum.

*The second floor library (one of the coolest rooms I’ve ever seen) was the first presidential library constructed for the purpose of storing a president’s papers.

When we walked into the visitor’s center, the lady at the desk asked if the kids wanted to be Junior Rangers. Of course they did. They each received an activity book with many things to do – and a list of objects they were supposed to find as we toured. The older the child, the more activities he/she has to do to earn the junior ranger badge.  Our tour guide, Lisa, was very patient  explaining things to the kids and since we were the only ones in her tour group, we didn’t have to worry about other people. 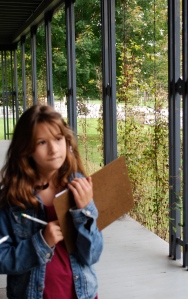 All in all, everyone decided it was a fun trip and the 9yo even said it the second-favorite thing she did on the trip.