We continued on our way up Starved Rock itself, though the key word here is “up.” Some of the steps on the trails were also snow-filled which made them level with 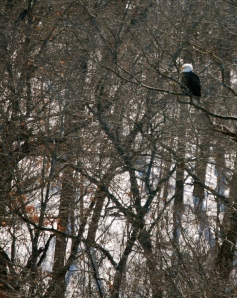 the next step.  But we made it and at the top a small group of people were gathered at one of the lookout points excitedly

pointing to an eagle posing in a tree down below. (Think how many pictures and home videos he’s in?)

A friendly man who was there with his wife had a pair of binoculars and let the 6yo get even a better look. Cool. After about five minutes of ear-piercing cold, we went to the higher lookout spot – this one overlooking the Starved Rock Lock and Dam (more about that later).  Then we walked along the board walk which oversees Plum Island. If you look closely, you will see a mature eagle and immature eagle on the island, although some people were saying they saw six. I might see another one in this picture, but I’d be stretching it to say I see six.  Maybe you can find six!

We gingerly made our way through the ice, back down to level ground.  We decided we didn’t want to try some of the 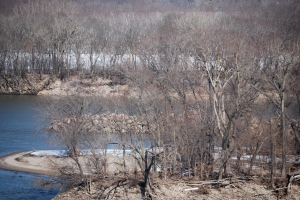 even-less cleared trails and headed for the car to drive around for awhile. Which we did.

Then, since the troops were hungry,  we began thinking “food.”

Kelli had done some prior research (since a rule of a wandering day is to to eat somewhere out-of-the-ordinary), so she headed for Utica and The Nodding Onion. We almost missed it – and you can see why.

The 6yo kept saying: “This is someone’s house.” And we would say, it’s not a house, it’s a restaurant, but it used to be a house.”  Still, it was difficult for him to imagine it NOT being a house when you had a living room with a fireplace, a dining room, a deck and obviously a kitchen.

The Nodding Onion’s claim to fame is that they cook everything from scratch – which, our guess is, includes even the ketchup.  Two of the kids really liked the homemade fries, but the other one didn’t. The 6yo ordered corndog nuggets and kept saying, “This is the best restaurant ever,” but the 7yo wasn’t so sure.

If you’re ever at Starved Rock and looking for a place to eat, I’d recommend it, but I wouldn’t make a special trip JUST to go there.