The next President is Calvin Coolidge whose house is in Plymouth Notch, Vermont. But before taking you there – I want to go on a side trip.

The first true roadtrip I remember taking was the summer between first and second grade. Before that, we had made trips to my grandmother’s house in New Jersey or to Thousand Islands in upstate New York, but this time we were going on a TRIP! Our destination – Maine, New Hampshire and Vermont.

I was seven and my memories of that trip are vague – except for a couple hazy recollections.

First recollection was our stop at Acadia National Park on the coast of Maine. My recollection of this adventure is not so much BEING there, but the ramifications of being there that happened when I went back to school in the fall. (Another time. Another story.)

Second I remember that we were there during a hurricane or at least the fringe of a hurricane. One evening the rain came down so incredibly hard, that Mom (who did all the driving because Dad was legally blind) pulled into the parking lot of a drugstore/grocery store/strip mall.  I can’t exactly remember WHERE we parked, but I remember sitting in the car, playing Old Maids as the rain pounded down on the roof.

Third I remember going to see The Old Man in the Mountain. This was a series of five jutting cliffs in the White Mountains that looked like a man’s face. He was first spotted (at least in recorded history) in 1805.  My seven-year-old brain was curious about seeing a man carved out of a mountain. I remembered it being a narrow road with lots of cars and people and the day being overcast, so we didn’t really get a clear view.  Which in my young mind, made the figure even more mystical. The picture above is from a postcard we bought that day.

I think because I HAD the postcard, the memory of that day stuck in my mind: standing there on the road, straining to see the face of man through the mist.

But I didn’t go back to New England as a child. A few years later, we moved to the Midwest and our trips tended to be further west.

We did take the kids back one year, but our trip through the three states was a breakfast in Maine, lunch in New Hampshire, dinner in Vermont – we can-check-those-three-states-off our list type of trip. No major site-seeing on that day. Though I thought about the OMITM, I knew it wouldn’t happen THEN.

Then in 2002, Ken and I were asked to speak at a conference in Portland, Maine and we took some extra days to actually see the area a little bit, but there were so much we wanted to see, we had to greatly limit ourselves.

We left Maine and were heading West and I said, “I really want to go see The Old Man in the Mountain.” Ken knew the story of my vague memory and knew that somehow this was important to me.

“I thought you wanted to go to Coolidge’s house,” he said.

“I do, but I also want to go back to the mountain. I want some clear edges to my hazy, misty memory.”

We checked on the map – 70 miles out of our way. But we’d see some new country and The Old Man in the Mountain.

So – we did it. The road was now wide and a few cars were in the parking lot. We got out and hiked around the base. This day was cloudy, too, but we could see him without any problem. My picture now had clarity. 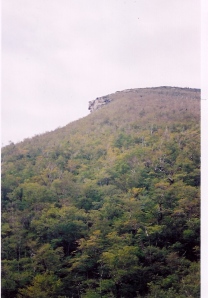 2 thoughts on “THE SIDE TRIP”