We did make it to Calvin Coolidge’s house (and town) after we clarified my fuzzy childhood memory at OMITM.

Just the location itself makes Plymouth Notch worth visiting. The town (almost all of it dedicated to Coolidge) is nestled among the rolling hills of central Vermont. By the time we found the site, the skies had cleared and the late autumn afternoon could inspire perfect-poetry-writing moments (if I wrote poetry, which I don’t). You’re not only visiting his boyhood home, but also his birthplace, his church, the cheese factory and his neighbors’ houses. He is buried in the town cemetery. 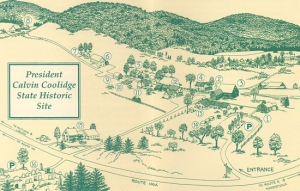 I took this picture of the site’s webpage just to show you the extent of the what you see. If you’re traveling with children but hesitate to visit “old houses,” this site has plenty of outdoor space.

This is the place where Calvin Coolidge’s father was justice of the peace and where Coolidge himself took the oath of office. The Coolidges were vacationing there when Harding died of a heart attack/stroke/poisoning out in California and in the light of a kerosene lamp, he took the oath of office from his father (a notary public).

Calvin Coolidge is best known for his lack of words and for his New England demeanor: hard-working, frugal, steadfast and practical.

Stories about his  “silence” include the lady who, at a White house dinner party, told him she had bet her friends she could make him say more than two words.  His answer?  “You lose.”

He told a reporter (who couldn’t get Coolidge to answer any questions): “If you don’t say anything no one can call on you to repeat it.”

When asked what his first thought was when he heard that Harding had died and he would be president, Coolidge replied, “I thought I could swing it.”

Coolidge decided not to run for a second term. Some people thought he simply did not want to. Others thought he could sense the coming financial crisis. So the Republicans nominated Herbert Hoover – who won.  When Hoover didn’t have the success his party wanted him to have, they went back to Coolidge and suggested he reconsider running for president again.  They felt he could end the looming Great Depression. Coolidge responded, “but it would be the start of mine.”

Coolidge died while putting together a puzzle of George Washington.