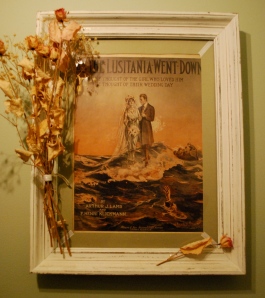 Anyone who knows our family well knows about the whole Lusitania thing – how if it hadn’t gone down, we wouldn’t be here.

So I when I saw the sheet music to “As the Lusitania Went Down” on e-bay, I bought it.

Where do you sing such a song?

AS THE LUSITANIA WENT DOWN.

The sun was sparkling brightly
upon the ocean foam,
The Lusitania, speeding fast,
was very nearly home.

Then came the blow so sudden
that pierced the vessel’s heart.
But while the crowd surged o’er the deck
a young man stood apart.

He stepped into a lifeboat,
but ere it left the deck,
he saw a woman and her child
upon the sinking wreck.

“Come, take my place”
he told her, and as she stepped inside,
he thought again of those he loved
and like a hero died.

He thought of his poor old mother
in a little southern town.
And sadly sighed “thy will be done”
as the Lusitania went down.