A year ago I had the once-in-a-lifetime opportunity of visiting Scotland with three friends I have known for a very long time (one of them since grade school).

We were the last to arrive at the hotel that first night – in Edinburgh. The others were already gathering for the first meal together so we took places at the end of the table – along with another couple and the husband’s dad.

At the end of the meal we were told that we had to have a buddy for the trip – someone who we didn’t come with. The goal was for the buddies to keep track of one another (this saved us from having to wear silly name tags like other tour groups). Our buddy had to be someone we didn’t know because if we chose the friend we came with – we might both be off shopping somewhere and no one would miss us.

As it turned out, three of us  were teamed up with the couple and the dad. 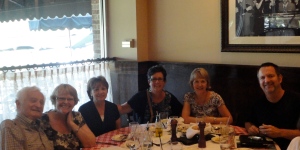 The next day we were told to get to know our buddies and introduce them to the group. Surprisingly when I told Bruce that I worked at Awana, I did not get a look of “Awana?  What’s that?”  Turned out their kids had been in Awana when they were growing up down in Arizona.

The dad of the group was from here – and we made some vague promise that if they (the couple) ever got up this way to see him, we should get together.

Today all seven of us did.

What fun – that in the middle of everyone’s busy schedule we managed this and had a great, great time!