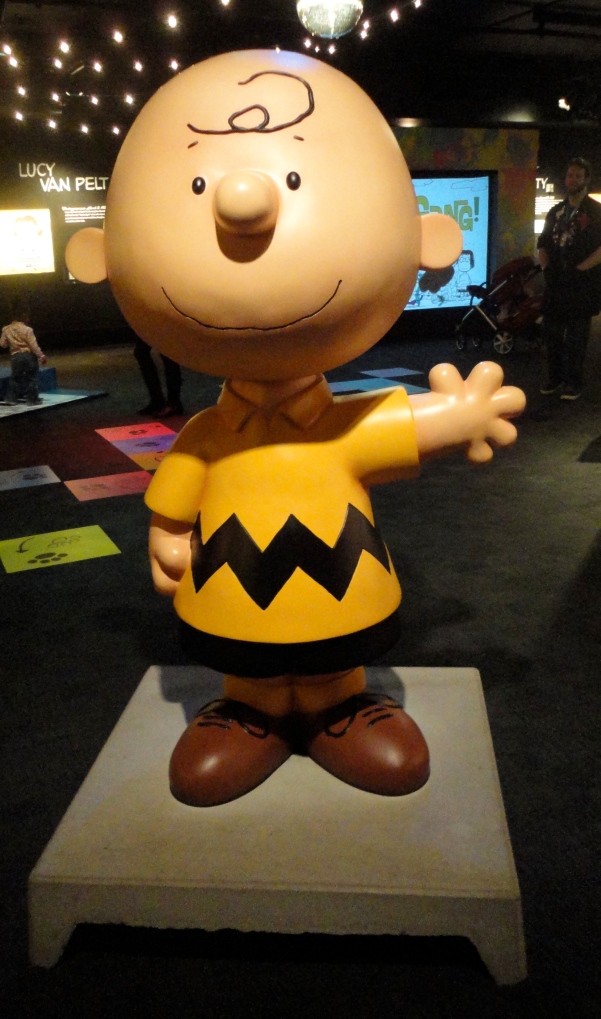 The reason Kris and I got motivated to go down (although I guess technically it’s up) to the M of S/I is because of the Charles Schultz  exhibition. We had both heard that it was good.   And it was – if you are a Peanuts fan. If you aren’t I don’t know what you’d think.

First, I did find out some things about the Museum which explained why it looked so different to us – there was a complete renovation within the past five years or so.  Which is why everything is so open and there aren’t so many boxy rooms.

Ok, back to the Schultz exhibition. We had heard that you had to stand in line to get in – but on this very rainy Tuesday, there weren’t that many people. Still, Kris got our passes before we got there. As I said, it cost $5.00 to get in and the first thing they do is one of those professional photo deals which I’ve never liked. And with everyone having phone cameras anymore, you wonder why anyone needs someone else to take their picture.  Oh, well … not a big deal.

The exhibit traced the history of Charles Schultz and showed some of his first drawings of the Peanut characters. Also told how the characters were named after real people and had some good cartoons from each decade. As I read the cartoons – again – I was reminded why he was so popular. They are children cartoon characters (appealing to children), but so much of it is adult humor.

Linus’ piano was in the middle of the floor. You could step on the keys and make music. You could also finish the “It was a dark and stormy night