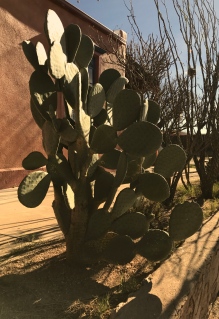 On our recent trip I was on a perpetual hunt for new foods … and I did have the opportunity to try some VERY new foods (at least for me) – but didn’t.

For instance, I passed up on the rattlesnake appetizer. I decided that  $10.00 for a bite of something I might not like wasn’t a good use of my money. (If it were less expensive or if someone had offered me a bite, I would’ve have tried it – but it wasn’t and  no one did.)

But I did discover a  new food I truly liked.

One morning, Cindy (the friend whom I traveled with) needed some time to catch up on her emails, etc., I had a couple hours to explore the area … and headed down the road to Tombstone, Arizona. I was there with Ken and we did the whole OK Corral, Wyatt Erp, Boot Hill Cemetery thing so this time, I was just there to wander around. The town was about 30 minutes from our hotel, so I didn’t have a lot of time, but I did enjoy walking around as the town was waking up and people were coming to work.

Side note … I was walking down the street and passed by two cowboys, or two guys dressed as cowboys – you can never tell in a place like Tombstone. They weren’t paying any attention to me, but were have an animated discussion about a gunfight. 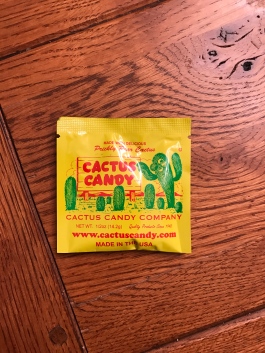 Anyhow, back to the food. I walked in a store and a lady was dusting the multitude of products on the multitude of shelves – quite a job since there was a lot of glass. She was tired of dusting and so we started chatting and she told me about cactus candy, The prickly pair cactus has a red fruit and out of that fruit, they make cactus candy – very similar in texture to those boxes of orange, lime and cherry slices you can get. (Actually you can also eat the cactus leaves, but I didn’t know that until I saw them in Jewel tonight. – I’ll have to try those sometime.)

I didn’t eat the candy until I got home … if I had eaten it sooner, I would’ve bought some more. (According to the web, you can get it at Wal-Mart, but that sort of takes away from the charm.) The taste was fruity (of course, it is made out of a fruit), and pleasant.