So yesterday I drove up to Madison to meet my son and daughter-in-law, their daughter and their son and his friend. We were there for the National History Day State competition for all those kids who had won in their regionals. This included the son and his friend. (Side note: They didn’t win, but they did super well. We were proud of them.)

Anyhow, my daughter-in-law had researched a restaurant called Dottie’s Dumplings Dowry which is supposed to be on a list of the 100 restaurants you should visit before

you die. They are known for their burgers and their fried macaroni.

So after the competition, we hurried down the street to eat, because we had to be back at the U of W within an hour and a half. (Seemed like everyone was in Madison this weekend – some for a parade, others for a gigantic horse show … and a few thousand for the National History Day event. Six hundred kids participated – many with an entourage of relatives, plus there were more than 400 staff.)

We did have to wait for about 25 minutes because the restaurant isn’t that big – but the wait was worth it.

Another side note: The night before Elizabeth and I shared a motel room and we were watching a cooking show from Italy. Some men were showing the host how they hunt for truffles – they have a truffle-searching dog. (People think they use pigs, but the pigs eat the truffles where as the dogs are more concerned with the digging.) And we said to each other, “Someday, we’ll have to eat a truffle.”

Dottie’s Dumplings Dowry also had truffle fries. Picture was taken from an awkward angle with my phone – I apologize for the blurriness.

So for an appetizer, we had fried macaroni and truffle fries.

First – the truffle fries. We all liked them – a lot, but they were also covered with bacon and cheese, so not sure how much truffle we were actually eating. Still delicious.

Second – the fried macaroni. Oh, wow – this was so good! Seriously. They looked like chicken nuggets, but when you bit into one, it was all creamy cheese and noodles. We decided it was a good thing we didn’t live closer. That fried macaroni is definitely a 10. 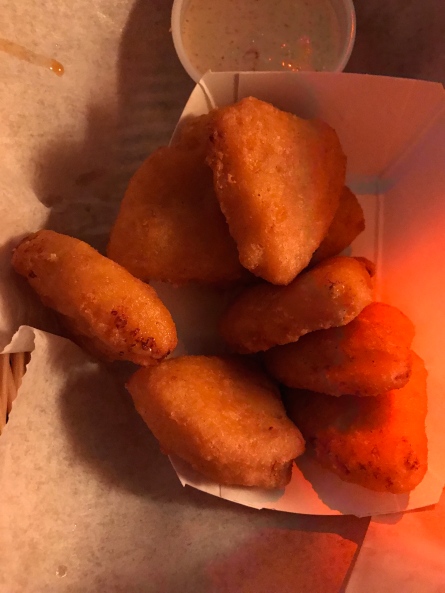 We ordered different kinds of burgers and all enjoyed our choices. (I got the basil and mozzarella burger). They have signs all over saying their burgers are the best in the world. Maybe close … I’ll let you decide. Their walls are lined with award-winning “best-of” certificates.

So if you ever get to Madison and are just looking for a fun place to eat. I would suggest Dottie’s Dumplings Dowry.

And don’t forget the fried macaroni.