Ever since I started my new food adventure, I’ve been wanting to try a dragon fruit. They are truly intriguing-looking.

So, when I was up north, I decided to buy one and test it out on the up north family. Now, nothing against the up north grocery store (we have shopped there for years and I’ve always liked it), but their dragon fruit didn’t live up to the ones I’ve seen in the suburbs. Maybe by the time they get up north, they are in the first stages of wilting.

But I bought one anyhow – the best-looking in the bin.

One night, as we sat around chatting with some company, I cut into the fruit. Some are white with black seeds inside – but the one we had was red inside – a glossy, shiny, red like the side of a just-waxed fire engine. 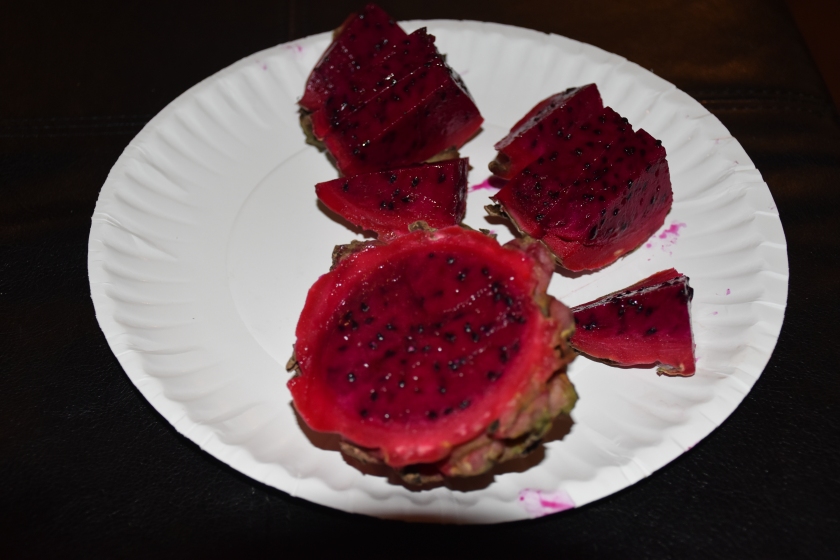 A lot of people are using dragon fruit in salads these days (so says the internet and of course, we believe the internet.) But we didn’t have a fruit salad, so we just ate it as is.

I gave everyone a piece and although we all sort of hesitated (trying new foods is always rather frightening), we did all (including the company) eat a piece.

Here Jeff is trying to figure out exactly what it tasted like because in the end, we all decided that it didn’t taste like much of anything. But at the same time, it was sort of good. Cindy liked the crunch of the seeds. And most of us said it sort of reminded us of a strawberry. I think one of the kids had two pieces. Even the company was sort of intrigued.

In the end, we decided on a five out of 10, but I’m wondering if we had one that looked like it wasn’t on the way to wilting, if it might taste better.

So, I might try another one. Or, YOU could try it and tell me what you think.